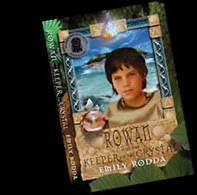 My grandson brought home a book from his school library which turned out to be a bit beyond his reading level. So his mother read it. And I read it.

The title was Rowan and the Keeper of the Crystal by Emily Rodda. Rodda is the penname of an Australian author, Jennifer June Rowe (born in 1948). She writes crime fiction for adults under her own name, but her children's fiction is published under two pseudonyms: Emily Rodda and Mary-Anne Dickinson. She has written several children's fantasy series: Deltora Quest, Rowan of Rin, Fairy Realm and Teen Power Inc., and recently the Rondo trilogy.

The book I read last night comes third in the Rowan of Rin series. It's nicely plotted, stylishly-written and requires the hero and the three young people he encounters to use their wits to overcome several difficult but connected problems. My daughter enjoyed it enough to say she might check out the school library and see if the rest of the series is there!

I'm in agreement: I often find children and young people's books are more imaginative and better written than some of the adult fiction I've encountered.

I started another book yesterday as well. It's a very early (1922) Agatha Christie called The Secret Adversary. It has a joie de vivre that's sometimes missing from her later mysteries, and is full of Bolsheviks and Sinn Fein and the overthrow of the civilised world, and stars a couple of her early characters, Tommy and Tuppence. Yup, that's what they're called. I've come across them before in another one of her books - if I remember rightly it had a very P G Wodehouse style about it. This one lacks that sense of humour (although Christie could be surprisingly witty when she wanted) but it zips along at a cracking pace and even if it's almost entirely unbelievable, it's very entertaining.
Posted by Mike Crowl at 9:24 am