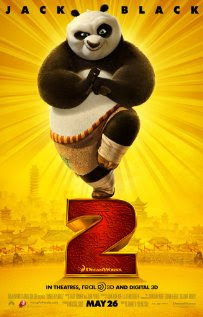 Went and saw the second Kung Fu Panda last night (in 2D, by the way, rather than 3D - it seems that the former might be a preferable way to watch it). It doesn't stand still for long (although that didn't stop a young child running up and down behind the seats at the back - where we were sitting from about three-quarters of the way through) and in fact there are times when the action is so fast-paced it's hard for the eye to keep up with it - at least on first viewing. I don't think my eyes have aged in this regard particularly, but movies do move very fast these days (just check out a 2000s action movie with one from the sixties, say) perhaps because those working on them get so used to what's passing before their eyes it seems slow to them. I think seeing the movie again on DVD would help clarify some of the action scenes which were often a blur in my mind.

It has some gung-ho humour and some tender moments (usually undercut by Jack Black's Panda character) and occasionally some wit. The story's not bad, though fairly uncomplicated, and even though it's as predicatable as the average cowboys and indians movie used to be, it's entertaining.

I think its greatest achievement however has little to do with the action or story. This is something that's quite subtle in its own way and something that's actually unnecessary. I'm referring to the design of the film, the look. From the outset this is a beautiful film with backdrops and scenery so finely executed and with such artistry that the movie is worth watching for these alone. Yes, of course, it's quite amazing to see the individual bits of fur on the Panda, for example, wafting in the breeze, but these are a textual feature that's been done well for some time in animated movies. What I found most striking was the sense of realness in much of the texture: the clothing hangs and looks like real material; daft items like the knitting wool that sits on the Ping the goose's head is tangible - even more than the creature it's sitting on. The water dripping in the Shifu the Master's first scene has the look and feel of real water. The roofs on the houses look like real tiles. And there are dozens of other examples.

Again all these things may not be new to modern animation, but they're done with a finesse here that's quite extraordinary. (They were a distinctive feature of another animated feature, one that didn't become a big hit - Fantastic Mr Fox - but I don't remember them being as vivid as these ones are.)

This movie also makes a feature of telling two backstories in different visual styles (as the tale of the three brothers is told in the second-to-last Harry Potter movie). Near the beginning it fills us in on the way in which the Peacock (voiced by Gary Oldman) became a villain; this section has the look of Chinese paper puppetry rather than animation, and is a delight to the eye. The other story tells how Po came to be adopted by the Goose. This is done is a sketchier style, somewhat more akin to the approach used by Japanese animation artists.

I'd be happy to see this movie again, just for the breathtaking look of it all.
Posted by Mike Crowl at 2:13 pm

Took a modest truckload of kids to see it yesterday. Mixed feelings. I thought the production design of the first KFP superior; equal in detail, but with a much broader palette. Shen impressed as the villain however, and Shifu always welcome - two great (voice) actors to thank.

Will probably be more impressive on blu-, where the colours will pop.

Best comment after from Nadia, ever the closely-observing aesthete. Me: "What did you think?"; N: "I liked the look of the way the peacock fought"; Me: "Snap!"

I've only ever seen the first episode on a poor quality DVD, so can't compare the two. Certainly the peacock was impressive!

Willonething?? I know who you are, but how did you get that alias?