Not a disaster, thank goodness

Well, it's been a bit of a day.  First we helped at the monthly church lunch this morning - and over lunchtime, of course.  It was a barbecue day, so I was cooking onions, as I have done traditionally since we started these lunches.  Beautiful day (following an equally beautiful day yesterday) and I probably got my neck sunburnt.  I mention the beautiful days because we've had a long run of rainy days, or days with bitter, sharp winds, or a combination of both.  Seeing the sun for more than a few minutes at a time is a great relief.

Because it was so lovely yesterday, my wife and I went for a walk along the road that runs beside the reservoir up on Dalziel Rd.  We'd never been down there before, and eventually it peters out and becomes the lead-in to some private properties, but we got a fair walk out of it, with a moderate amount of hill-climbing.  There's a deer farm along there, so we and the deer inspected each other (and the dog did too) both going and coming back, and they performed intricate manoeuvres whenever we tried to count how many there were.  (Forty-ish, we decided.)  On one of the properties (which appear to be mostly lifestyle blocks of several acres) there was a host of gum trees, a wonderful cathedral sight, with rich, dense grass beneath.

As we drove back home again, via a road that used to be gravel and is now sealed (and was unpleasant to drive on when it was only gravel, because it's fairly steep in places) we saw some small bird that appeared to have things dangling from it on either side.  At first I thought they were wings, but they remained stationery when the bird flew.  Some curious decoration, and not a bird I recognise at all.

In the afternoon we shovelled some more bark mulch onto our garden, and I went for an audition for the play on the life of Rosalie Macgeorge that our church is putting on at Easter next year - it's the church's 150th anniversary.   And that was pretty much enough to wear us out for the day... 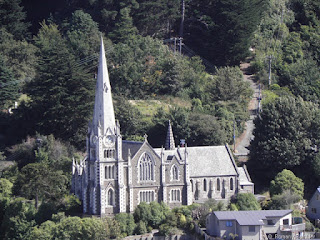 But back to today.  After we'd finished with the lunch at church, we decided to head straight down to Port Chalmers, where Sunny Side Up (the a cappella group I sing with) was doing six songs at Iona Church, as part of that church's fundraising.  (A million dollars are required just to bring the church back to its normal state.)

We thought we'd kill the extra time we had before the concert started by having a cup of coffee in Port Chalmers.  We nearly didn't get there.  On the way down, my wife was eating the salad she'd brought with her.  She started to cough, then choke and splutter, and then just choke full stop.  I stopped the car - it took a moment for me to realise that she was trying to get her breath - but I had no idea how to help her.  Apparently a stringy bit of salad had gone the wrong way down and was caught at the back of her throat.  She tried to reach into her mouth to get it, but her fingers couldn't grasp it because it was too slippery.  I tried, with no result either.  She grabbed a kitchen cloth that we had in the car for no obvious reason and, because it was dry and had some grip, managed to grasp the bit of lettuce and pull it out.  Messy and extremely scary.  For both of us.

Onto Port Chalmers feeling rather edgy after that experience, and had a coffee in a cafe near the Church.   The concert had an interesting mix of artists, with Owen Rooney as compère.  Apart from SSU, there was a pianist, an Irish comedian/baritone (the pianist accompanied him too), two very good saxophonists (one of whom I'd seen playing at the Competitions a few weeks ago), a quartet of singers made up of some of the top people from SSU (known as One Lucky Guy because there are three women and one man in it); a woman singing her own compositions accompanying herself on guitar, and an organist (I think the church's organist, in fact).  One Lucky Guy are a great combination, and do some marvellous, jazzy, a cappella arrangements.  The composer's songs had interesting guitar accompaniments, but didn't seem to have an awful lot of lyrical content, though the singer had a good voice.  The Irish baritone, who had a lovely voice that was still holding up even though he obviously wasn't young, told some good clean jokes, and sang some old favourites from the Irish ballad repertoire (not Danny Boy, thank goodness).  The pianist's solos left a little to be desired; I got the impression he'd played them a lot (he plays at rest homes and such) and that his heart wasn't quite in it.  I might have been wrong.  The organist....well, I'm not sure what was happening up there in the organ loft, but it was a bit dodgy at times!