Two and a half movies

From the sublime to the ridiculous and back again.   One might say.

I watched about two-thirds of Peter Watkins' 1974 made-for-TV movie, Edvard Munch, the other day.  I'd never heard of it, and it took me some time to connect the director's name up with the somewhat notorious pseudo-documentary, The War Game - and the even earlier, Culloden.   Watkins makes documentaries that use amateur actors and mix drama and doco styles in such a way that it's hard to tell which format is being used at any one time.   In Edvard Munch, the characters/actors often look at the camera even while they're in the middle of what seems to be a relatively dramatic scene.  After a while this became irritating; the sly or awkward glances at the audience conveyed nothing additional to the scenes, and kept tripping us out of the historical context.  Plainly this is what Watkins wants, but I'm not sure that it always works.

I gave up on the movie, as I say, about two-thirds of the way through.  It was repetitive, and slowly-paced, and jerked back and forth between childhood scenes and painting scenes and love scenes, and scenes with other characters who were only incidental to Munch's life.  Some of these spent time talking to an off-screen director, as people do in reality shows.  In fact some reality shows are more dramatic than portions of this movie were.

It was beautifully filmed, with a lighting style all of its own, and the scenes in which paintings were gradually formed were wonderfully done.  But by the time we'd been told for the umpteenth time that women were subjugated to men and that marriage was some sort of horror, or seen one or other of Munch's siblings or relatives choking up blood (from tuberculosis) yet again, the whole thing began to outstay its welcome.

Considering that the cast consisted of amateur actors, there were actually some very good performances, in particular Geir Westby in the title role.

Coming down a peg or two, we watched Nativity!, with Martin Freeman as a dull and stale teacher who's been landed with having to produce the annual school nativity play, and Marc Wootton as a temporary classroom assistant who's manic in the extreme, and everything that Freeman isn't.   It's a predictable piece, with some moments of considerable humour (not all of them involve the kids, some of whom are great and down-to-earth; one of whom is an irritating little twerp whom the director obviously thought was funny, and who gets into scenes where he'd be better not to be).  Wootton, by overplaying everything to the max, actually makes his role work; Freeman has done his role any number of times before, but somehow finds some real emotion in it, and makes us have sympathy for this rather annoying little man.  The rest of the cast do their bit, and there's a splendiferous performance of the Nativity in the old Coventry Cathedral at the end.  Considering that the school is obviously on its bare bones and that it appears to have only one class (Freeman's - other teachers appear but not other kids), it's a bit surprising to find at the end that the show is so spectacular, and that somehow Freeman and Wootton are doing everything backstage: make-up, dressing, management, lights, flying kids from the steeple and so on.  Don't apply the logic meter to this one.

And back to something with a bit more content and class: Twelve Angry Men.  Not the Henry Fonda version in black and white, directed by Sydney Lumet (though that was what I thought I'd got out of the library's collection), but a later made-for-TV version from 1997 with a very respectable cast headed up by Jack Lemmon and George C Scott (both looking pretty old, I must say: Scott was 70 and Lemmon 72 at the time). along with Tony Danza, James Gandolfini, Armin Mueller-Stahl, Hume Cronyn (88 at the time of production), Courtney B Vance, Ossie Davis (80), Mykelti Williamson (Bubba, in Forrest Gump, but a much tougher character here) and others. 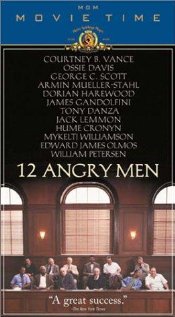 The combined experience of these older and younger troupers shows: they take this top notch script and give every line its due.  William Friedkin's direction is spot on most of the time: keeping twelve men in focus throughout an entire movie is quite some feat, and there are a couple of shots in which one character or another is unintentionally obscured, but in general we not only have a sense of the claustrophobic atmosphere, but also manage to keep track of who's who and where they stand (not only physically, but on the case in hand).  I suspect the piece was put together at a quicker pace than full-scale movies are, which may account for its occasional visual lapses.

The original script is a little adapted for this version, with some references to colour and race, and some changes to occupations, but in general it sticks closely to the original.  The Wikipedia article on the play (which began life on television, was adapted as a stage play shifted to the movies, and has been subsequently adapted and altered into a number of different versions since) is interesting in regard to the way in which this piece has taken on a life of its own, even becoming Twelve Angry Women at one point.
Posted by Mike Crowl at 10:31 pm