After the production of Grimhilda! was over, I wrote the draft of a book version of the musical.  I thought this would be an easy task, but it turned out to be full of hooks that I kept getting stuck on.  On the stage, a dramatist doesn't have to explain everything: some of what isn't in the script will be filled in by the actor, or by the director - or even by the music.  Things are pared down in a stage script: the scenery is often the bare minimum, just enough to convey an idea of the place.  Time is loose; even though it pays to keep things within a certain specific period (such as a day, or a night, or two weeks), the actual chronological time can be stretched and tightened as the scriptwriter desires.  There's no clock on a stage (and if there is one, it's often a bit of a nuisance).  The background of the characters may be left quite skimpy - in the musical we didn't tell the audience what the parents did for a living, where Toby went to school, why the toys were as big as the 'real' adults, how Mr and Mrs Map could possibly be married when they were separated by a parchment (and why didn't they just rip it up?)  All these sorts of things are irrelevant on stage; the audience lives in the particular moment, and can ask itself questions afterwards, if it so desires.

With a book, it's necessary to fill in all sorts of details for the reader, otherwise their imaginative landscape can seem very bare.  The reader may not pay attention to all this detail (I'm a terrible one for missing vital points by skim reading) but it needs to be there.  Even in modern novels, there has to be a sense of a real place, of real time, of people having real jobs and having to go to work, or a real neighbourhood in which they live, and much more.

In the musical we could start straight into the action by showing, quite briefly, that the parents didn't give their son much of their time.  In the book, it proved very difficult finding exactly how to start things, how much explaining to do before the action started, as it were, and perhaps most importantly, why these parents were so selfish.  And then having explained a great deal of that, it was a matter of taking unimportant bits of those details back out again.  It was all a bit like the conga: you put your detail in, you take your detail out, you put your detail in and you shuffle it about.

I was reminded of all this by seeing an ad for a diamond engagement ring, because of course, part of the story of Grimhilda! concerns a diamond mine run by the villain of the piece.  What, on the stage, was a relatively small space in which the 'diamond mine' existed, and in which the dozen or so workers worked, couldn't be as small and as barely inhabited as that in the book.  I had to re-imagine the mine altogether: it had to be a much bigger place, and there needed to be a lot more people there (though I avoided adding in yet more names and personalities - in fact two of the women in the musical became one person in the book).  It had to be placed within towering mountains, and as soon as the mountains appeared (they're only mentioned in the musical), it became a matter of how tall they were, how impregnable, and so on.  Was there grass on the mountain sides?  Were the paths steep and slippery? 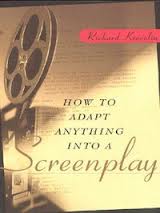 The worst business of all was dealing with the death of the other little boy in the story: Jackie Axelquist.  He's mentioned a number of times, and is a vital part of the plot, but how he died isn't discussed.  Unfortunately, you can't just say in a book that Jackie died.  There are no bones on the skeleton, and skeletons aren't very attractive to readers (unless it's a horror story).  You have to consider what details to include as to how Jackie died, and then you realise that this could be quite grim for the younger readers of your book.  Oh, what a task I set myself!  :)

I have a book on my shelves (yes, I still have some left after the big purge) called How to Adapt Anything into a Screenplay.  It's by Richard Krevolin.  It would be a useful book, no doubt, but it's remained one that I haven't really got my teeth into yet.  But more than a book about turning anything into a screenplay, what I need is a book called: How to adapt your own musical into a book.  If you know of such a piece, tell me about it.  I really, really need it.
Posted by Mike Crowl at 9:39 pm