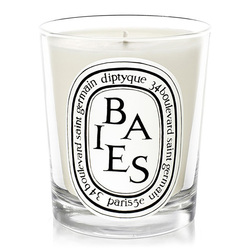 I'd never heard of the company, diptyque, (no capital letter) until today, and to be honest at first I was more intrigued by the word than by what they actually sell! It's a French brand name, and the word goes back to the Greek (see below). Although there's a good deal of information about the company and its history on its beautifully designed site, it doesn't seem to say where it got the name from.

The distinctive oval-shaped stickers appear on all their products as well as the rather curious arrangement of the letters of whatever the product is - in this case, Baies candle by diptyque. Baies is a mixture of blackcurrant and Bulgarian rose, I believe, and early in their history the company produced English perfumers for French customers.

But back to that word, diptyque. Its origins are similar to our English word, tryptich, meaning a painting that consists of three sections.  I assume there's an English equivalent of diptyque too, presumably spelt: diptych.  Yes, of course there is.

Talking about interesting words, I came across this one yesterday: Occlupanid.  Apparently this was coined by the delightfully named Holotypic Occlupanid Research Group [HORG] as a generic term for the humble bread tie (occlu, close, pan, bread).  The Wordways column in this morning's paper has a number of other interesting words that we could well start using again (the English language is full of words that have been left behind, sadly).  Usufructry, for instance.  This means the temporary possession of a piece of land that doesn't belong to you, and making use of it: you might graze sheep, if you had any, or pick the apples off the trees on the land.  It was kind of like taking windfalls before they'd actually fallen.

Fixfax is the Scottish word for a pillory (it's also spelt/pronounced paxwax in some dialects).  It's typical of that English usage of two identical sounds separated only by the first consonant.  (There's a name for that, but don't ask me at the moment what it is.)

There's also nuncheon, which belongs to the family from which we get luncheon, and truncheon.  There aren't many words in this family so it's quite good to come across a long-lost relation.  Nuncheon is the virtual equivalent of luncheon, except it relates to drinking.

And finally sockdolager, which is apparently one of those words that arose serendipitously out of the blue one day: it means a knock-out punch.  'I've given him a sockdolager, and that's put him in his place.'

Actually, not finally, after all.  I forgot to mention that the earlier use of the word treadmill was as a means of punishing people who'd been naughty in some way.  Prisoners were supposed to 'become wearily repentant of their crimes.'  Sounds a bit like the modern treadmill, says my wife.