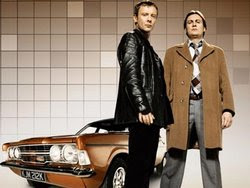 I hadn’t seen any episodes of the tv series, Life on Mars, before we left NZ. It was becoming quite a hit there by all accounts. Well, here in the they’re doing a repeat of it, so I saw the first episode last night – without ads, which was great. (I wonder how much editing they do to NZ versions of these series, when you consider that the program I saw was round about an hour anyway.)

John Simm has a very intense role as the man who may have gone back in time, may be in a coma, or may have just gone round the twist. Whatever the problem is, he plays the role very well, and elicits considerable sympathy from his audience in spite of his rather hard-nosed nature.

The seventies ‘look’ of everything is perhaps a little exaggerated. Were we really that overdressed and excessively hairy? I suppose it’s possible. And of course everyone smokes like a chimney, so the atmosphere indoors looks perpetually cloudy.

Hopefully I’ll be able to catch up with some more of it, although it’s on quite late at night. Not that that’s worrying us much at the moment; we can sleep in as late as we like!