The Lady in Question

Somehow managed to catch an old movie from 1940 on tv this afternoon. It was a very classy print, and fitted the wide screen format without anybody looking twice their size, so obviously some work had been done on it to make it viewable.
Seemingly this particular movie was notable for being the first in which Glenn Ford and Rita Hayworth appeared as a romantic couple. It took me a while to recognise Ford because he looked so young. By the time he came back from the war, a few years later, he’d aged considerably, and was much more the way I remember him. Hayworth plays a very subdued role; she’s a character who’s under suspicion and always on the back foot. None of the temptress here, even though Ford falls for her at first glance.
The film was The Lady in Question adapted from an earlier French movie called Gribouille. It concerns a bicycle shop owner played by Brian Aherne who’s called into jury duty, and, by speaking out at the right moment, manages to get Hayworth (the accused) acquitted. He’s a bluff, good-humoured character - a bit too off-hand about the other relationships around him, and not always wise. However, he offers to give Hayworth a job after the trial, and she comes and lives with the family. Of course one of the other jurors believes she was guilty and keeps popping up every so often; and of course both Ford and his sister’s boyfriend know who Hayworth really is. It’s surprising half the town doesn’t, but that’s neither here nor there.
The acting is all a bit over-the-top - these are Americans being French people, remember, (even though they call their wives ‘Mrs’ rather than ‘Madame’ and speak with good, solid American accents), and anyway the French are more ebullient than the Americans - aren’t they? The script isn’t well written, never being sure whether it’s a drama or a comedy, and several scenes are played for their comedy effect, which undercuts the dramatic ones. Nevertheless it’s an interesting example of a typical studio production, with the small parts being played by actors who bring an eccentric quality to their roles. 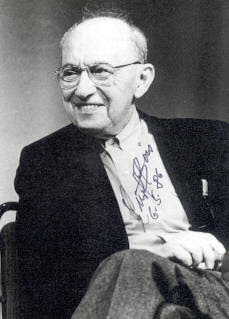 One piece of trivia: the part of Lurette, the little accountant who causes so much hassle, is played by Curt Bois. Bois’ career in German movies began in 1907, when he was only six (!) and ended in 1989. Around 1937 he came to Hollywood and appeared in nearly forty movies before returning to his native Germany. He’s often uncredited in the Hollywood movies, or has tiny parts (such as a pickpocket in Casablanca). But he kept on working, and survived long enough to revive his career in his own country, appearing in some 35 movie and tv roles, including that of Homer the poet in Wim Wenders’ famous Wings of Desire. (Later remade, like Gribouille, into a much less worthwhile movie, City of Angels, starring the lugubrious Nicholas Cage and the super-cheerful Meg Ryan.)
Posted by Mike Crowl at 2:16 am