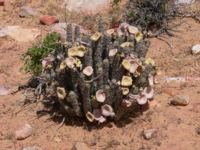 I’d never heard of Hoodia Gordonii until today. Maybe it hasn’t made as much impact in this part of the world as it has in the States, where, of course, the need for diet control is even greater than in NZ. By all accounts, real Hoodia Gordonii is hard to find, and is consequently expensive. As you might expect, there are quite a few cheap ‘versions’ of Hoodia on the market - so beware.
It’s a cactus-like plant that people in South Africa have known about for centuries. The plant takes up to seven years to grow to maturity, at which point it’s used by locals as a way of feeling full even though you haven’t eaten anything. This idea would naturally appeal to the Western world where there are enormous problems with overeating and weight control.
Because there is now such a demand for it in the West, the South African government has had to limit the export of it, and the plant has received protected status. Furthermore, genuine Hoodia Gordonii comes with a C.I.T.E.S certificate. (C.I.T.E.S stands for Convention on International Trade in Endangered Species of Wild Fauna and Flora). This is only issued by the office of Western Cape Nature. Without this Hoodia cannot be legally exported abroad from Africa.
Posted by Mike Crowl at 9:10 pm