The year of the amethyst

This year we celebrated our 33rd wedding anniversary. The traditional stone for this anniversary is an amethyst, but since we were spending a lot of money going to England, the amethyst rather got sidetracked. We haven’t been much good at celebrating anniversaries with the traditional gifts, though the kids managed to find pearls (including pearl cufflinks) for our thirtieth. Last year the traditional gift was a conveyance. A conveyance! Well, the mind boggles at the possibilities – it’s certainly a lot more ambiguous a possibility than an amethyst. Anyway, my wife has gone on about buying a campervan for years, and we’ve never come to agreement about the value of getting one. So last year I managed to find, with some difficulty, a model campervan, and presented it on our anniversary. She took the joke with delight, and it’s still sitting on her computer at work. 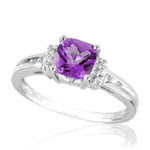 I checked out amethysts on the Net just now, to see what sort of things are available. Unfortunately, my wife isn’t much into rings these days. Maybe I should think more in terms of a necklace, if it isn’t too late to celebrate!
By the way, why do Americans spell jewellery as jewelry and jewellers and jewelers? I can understand the second spelling, perhaps, although the full pronunciation of the word must surely be: jew-el-lers, with a degree of doubling of the letter ‘l’. But jewelry? It smacks of a lack of delight in the sound of words. But I suspect I’m going to be banging my head against a wall on this one.
Posted by Mike Crowl at 6:02 pm