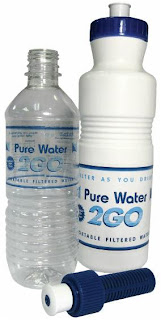 A generation ago people would have laughed if we’d suggested that in future we’d be buying water from the shops to drink. We used to drink ordinary everyday tap water without blinking an eyelid, and never worried about its level of contaminants. And maybe we should have carried on doing that. But the pure water industry is so ingrained now that few people would go back to the old days easily.
So we accept the position as it stands and get on with it. In my office one of the jobs I’ve inherited is to fill the water bottle every couple of days. The water has to be filtered through a water filter before it reaches the bottle, but it’s no great task, and sometimes I can read the newspaper before anyone else while I’m waiting.
It always seems to me that the filter can’t be doing much filtering, because as far as I can tell the water goes in through it and pretty much straight out again. Still, the water, especially once it’s cooled by the water watchamacallit, is certainly very drinkable.
Purewater2go.com advertises portable water filters that do this task while you’re on the go. So presumably you can grab up some water from any old place when you’re out jogging, for instance, and filter it on the spot. The only difficulty I see here is carrying a water bottle and a filter, but if it’s pure water you want, that’s what you’ll have to do.
The site says millions of people die every year from not having fresh drinking water. I rather suspect that more than 99% of those people don’t live in Western countries, but that doesn’t make it any less true. Perhaps purewater2go has a huge untapped market in Third World countries.
Posted by Mike Crowl at 8:17 pm