On the coattails of fame 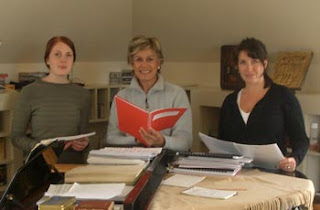 My wife pointed out to me an interesting fact a few months back when Kiri te Kanawa, Ana James, and Anna Leese sang together at Twickenham.
Here’s the paragraph that appeared in the newsletter of the Kiri te Kanawa Foundation.
Jonah Lomu's recent return to rugby, following his kidney transplant, was marked by a charity match at Twickenham in honour of former English Captain Martin Johnson. The match was televised throughout the world. Jonah asked Dame Kiri to sing at the opening ceremony and she in turn requested that two of the young singers she had been working with, sing with her. Ana James (first recipient of a Foundation grant) and Anna Leese joined Dame Kiri for an unforgettable experience which also gave them both invaluable experience – and exposure.
What my wife pointed out was that at various points in time I’d accompanied all three of these singers. Nothing like swinging on the coattails of fame!
Kiri te Kanawa was in her second year of study at the London Opera Centre when I went there (for one year) to do the Repetiteur’s course. This was back in 1967/8. I worked with her as a repetiteur a number of times, because that’s what the singers and repetiteurs did, but on one occasion also accompanied her at a very unmemorable concert in the depths of Surrey – or somewhere! It was one of those concerts put on for a select group (a rather wealthy select group, I seem to remember) and they were probably as interested in music as I am in making money on shares – that is, marginally. Kiri drove me down to the concert and home again, a longish journey, and I have no idea what we talked about.
I accompanied Ana James quite often when she was in her early singing stages. She was always a wonderfully focused young singer, and had a voice that was a gift. We performed at local concerts and competitions (where she usually won). And then 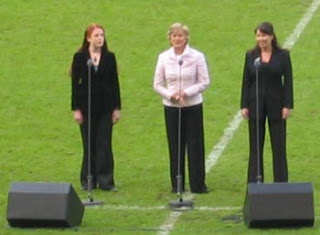 suddenly, she was moving into the big time, and no doubt has a long career ahead of her.
Anna Leese and I had much less to do with each other. We had one practice together for a concert put on, I think, by the Dunedin Opera Company at the Mayfair – one of their perennial Sunday afternoon concerts, if I recall. I seem to remember there was a pianist of some note there too, who played souped-up versions of popular classics. Anna knew her song without any help from me, and all I did was keep up with her. She was also another very focused young singer with a remarkable gift of a voice, and is proving that by the way she’s forged ahead so early in her career.
Photos from The Newsletter of the Kiri te Kanawa Foundation
Posted by Mike Crowl at 11:09 am