This is a rather wandering piece… 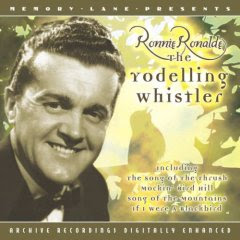 In the 1950s there used to be a recording artist called Ronnie Ronalde (the emphasis was on the second syllable). Ronnie’s gift to the world was the ability to whistle, (and yodel, I've just discovered) not just like your man in the street (never heard a woman whistling in the street); Ronnie could do all sorts of bird calls, and he had a considerable range and a great deal of flexibility. He was very popular on the 4ZB Request session which played every Sunday around lunchtime, so I guess he was pretty popular generally.
For some reason I was reminded of Ronnie this morning. Also in the 1950s cinemas used to show ‘shorts’ – short films on all sorts of topics which appeared before the Intermission. Some of these must have been years old when we saw them, and some of them were extremely cheaply made. One I recall with some sort of strange horror presented a band, which had a man who whistled with them. At one point the man whistled the tune for what seemed like a very long time. He was presented full on, with no variation, and no cutting away to anyone else in the band. A man whistling is not a pretty sight, even though the sound may be okay. For a start he can’t really smile, so the face presents a permanent pucker. This guy didn’t move either, so as a figure in a film he was what you would call, static. And it wasn’t actually that easy to tell that he was whistling. Anyone could have been doing it.
How times have changed. Filmmaking is often frantic. Some films know how to put dancing across – Shall We Dance, for instance – but others, such as Moulin Rouge, are a nightmare of cutting. In the big dance sequences in that film there was so much chop cutting that the dancers could have been dancing or standing still. It wouldn’t have made any difference: the editor was doing all the dancing.
Peter Jackson’s movies are made up of thousands of shots – for better or worse. As David Bordwell was commenting in a book I was reading a couple of days ago, The Way Hollywood Tells It, Jackson sometimes cuts in such a way that you often don’t see the actors’ acted reaction to what’s going on, only Jackson’s version of it - which, in fact, may have been filmed at a different time and place. In Brian Sibley’s book on Peter Jackson, we’re told that an emotional scene between Frodo and Sam was actually filmed in two places, a year apart. The shots showing Frodo speaking were shot a year in advance of the shots showing Sam speaking, though you wouldn’t know it on the screen.
Bordwell says the Hong Kong action films, for all their frenetic behaviour, do actually have scenes in which characters can be seen on screen together, which gives the actors a chance to react in their own way, rather than as the director cuts it.
Posted by Mike Crowl at 3:14 pm