Amp me up, baby

I've written about amps before, usually with tongue considerably in cheek. My relationship with amps has usually been through our church, where for a while the size of the amplifiers seemed to increase every few weeks. Which just made things louder rather than more subtle.

When we did the New Zealand opera, A Christmas Carol, about three months ago, the four keyboard players and the conductor, tore their combined hair out on a number of occasions during the later stage of the rehearsals in the theatre, because it seemed no one was actually in charge of sound (a surprising omission) and yet we had sound to deal with. Keyboards don't sound good without amplifiers, as you'll know.

Thankfully, our assistant stage manager used her wide-ranging brain to bring the amplifier that we did have in-house under control. Initially it seemed as if all the sound from the keyboards was blasting its way around the orchestral pit. But gradually we worked out how to get some control, some subtlety and the audience heard a great sound, and those on stage heard more than enough to be able to sing along with.

All of which to introduce Bugera Amps, a kind of amp I'm not familiar with, but which are apparently available in all shapes and sizes, to suit all sorts of musical ears. (And probably a few unmusical ones.) The little stay-at-home-put-my-grand-composition-on-the-computer type to the I'm-playing-the-biggest-gig-I've-ever-played-so-this-amp-better-do-the-job type. Good old Bugera!
Posted by Mike Crowl at 3:51 pm No comments:

I dipped into Pauline Kael's Kiss Kiss Bang Bang again recently, and came across the following quote in her review of Ingmar Bergman's film, Persona:


It may be that an open puzzle movie like this one, which affects some people very profoundly, permits them to project into it so much of themselves that what they think the movie is about has very little to do with what happens on the screen. This kind of projection ˗ which we used to think of as the precritical responsiveness of the mass audience ˗ is now common in the educated audience. People can be heard saying that they ‘didn’t worry about whether it was good or bad,’ they ‘just let it happen to them.’ And if the educated audience is now coming around to the larger audience’s way of seeing movies, I would suggest that they are also being sold in the same way as the larger audience, that advertising and the appearance of critical consensus it gives to certain movies are what lead people to ‘let’ certain prestigious movies ‘happen to them,’ just as the larger audience lets an oversized musical spoof like Thoroughly Modern Millie happen to them. The idea is that ‘art’ should be experienced, not criticised. There seems to be little sense that critical faculties are involved in experience, and that if they are not involved, advertising determines what is accepted as art.

If what I understand Kael to be saying is correct, it means that much of what is claimed to be 'art' in movies, as in 'art house movies', is merely movies that are 'sold' that way. These movies can be obscure, strange, full of peculiar and unrelated incidents, sometimes badly filmed, and often have next to nothing in the way of a story. There was a great trend for these sorts of movies back in the sixties: Bergman brought the Swedish approach, Fellini and Antonioni the Italian one, and there were a bunch of awful French movies that made virtually no sense at all, such as those by Jean-Luc Godard. They were the 'new wave.'

Some of these directors were masters of cinema-making, but not of story, and they brought oddball movies to the screen that were more about mood and emotion and possibility - or the lack of it. Great actors appeared in them, and sometimes must have wondered what on earth they were supposed to be acting. Certainly audiences must have often wondered what they were watching, but in the mood of the times it was considered trendy to make a great noise about these films often more because of who they were made by than for any other good reason. Viewing Bergman today, you can still get the impression of a great mind at work, though increasingly the films seem to be distant from us. Unlike many films that have endured, they lack the means to affect us emotionally. Watching Fellini's 'masterpiece', La Dolce Vita, we get to the point where we wonder if it's ever going to end, even though a lot of what goes on is very watchable. But there doesn't seem to be anything to really grasp in it, and this became increasingly the case with his movies. Antonioni's films always seemed to be saying something you couldn't hear. Godard's movies were strange radical things in their day, full of unexpected violence, yet even then they seemed to have no heart (Fellini at least had a heart), and Bergman's films can come across as cold (though in some of his earlier movies we can empathise with the characters more readily).

Were these films great or were they sold to us as great? I think the moviemakers themselves were great artists, but they tackled things from a strange mental viewpoint.

Posted by Mike Crowl at 3:40 pm No comments: 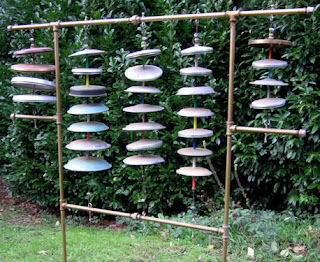 Remember the days when a musical instrument had a single name (or at most two, like the spuriously-named, French Horn)? Yes, some of the names might be odd, like a Serpent or the Theremin, or the Aquaggaswack (yup - see the picture on the right), but they were easily remembered. (Well, maybe Aquaggaswack isn't easy to remember, or spell.)

But now we have instruments and add-ons to instruments that come with names like the Eventide h9 Harmonizer Guitar multi-effects pedal. Looking at that name I'm not even sure where to start in terms of deciding which is the most important element. Sure, 'Eventide' is obviously some kind of brand name, so - with all due respects to the makers - you could cut that out. The 'h9' is presumably some kind of class of pedal, and I guess that's kind of important. Relatively. What the 'Harmonizer' aspect is I'm not sure; I suppose it's the electronic part that makes sure everything else works together. Or not.

The 'Guitar' - well that's easy, except that most likely it's an electric guitar of some kind, so it's not quite as straightforward as the Aquaggaswack. 'Multi-effects' makes me quake. We have a young feller at church who uses a few 'effects' on his guitar. One of them sounds mostly like static. Not so pleasant when you're trying to sing over it, though I guess it has its place. Somewhere. Maybe on a rock band stage, in performance, when you can wear earplugs.

And finally 'pedal.' Well, we all know what that is: it's a word that covers a multitude of appliances, mostly worked with the foot. Three of them in some cars, two in others. One on grandma's sewing machine, two on a harmonium (and jolly hard work they are, too).

Which brings me back to my point. It's taken three paragraphs to explain a single instrument, or a single instrument's add-on. I guess we could just call it an 'h9' and be done with it, but it's not quite as interesting as a 'bikelophone' or a Didjibodhrán.
Posted by Mike Crowl at 11:56 am No comments: