From an interview with Richard Wilbur 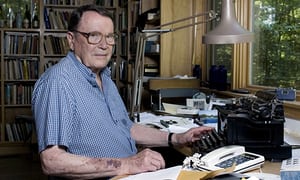 This year I managed to memorise one of Richard Wilbur's longer poems, Lying. Not only one of his longer poems, but also the one to which his wife at first responded, “at last you’ve written a poem that’s unintelligible from beginning to end." She came to change her mind, and though I must admit I still don't understand all of it, it became clearer as I learned it.

Here are a couple of paragraphs from a 1977 interview with Wilbur, who died in October this year [2017]


INTERVIEWER
How do you compose your poems? Do you write in long hand or on the typewriter? Do you write in bursts or long stretches, quickly or laboriously?
WILBUR
With pencil and paper and laboriously, very slowly on the whole. I do envy people who can compose on the typewriter, though I reject as preposterous Charles Olson's ideas about the relation of the typewriter to poetic form. I don't approach the typewriter until the thing is completely done, and whatever margins the typewriter might offer have nothing to do with the form of a poem as I conceive it. I write poems line by line, very slowly; I sometimes scribble alternative words in the margins rather densely, but I don't go forward with anything unless I am fairly satisfied that what I have set down sounds printable, sayable. I proceed as Dylan Thomas once told me he proceeded—it is a matter of going to one's study, or to the chair in the sun, and starting a new sheet of paper. On it you put what you've already got of a poem you are trying to write. Then you sit and stare at it, hoping that the impetus of writing out the lines that you already have will get you a few lines farther before the day is done. I often don't write more than a couple of lines in a day of, let's say, six hours of staring at the sheet of paper. Composition for me is, externally at least, scarcely distinguishable from catatonia.
INTERVIEWER
What is it that gets you started on a poem? Is it an idea, an image, a rhythm, or something else?
WILBUR
It seems to me that there has to be a sudden, confident sense that there is an exploitable and interesting relationship between something perceived out there and something in the way of incipient meaning within you. And what you see out there has to be seen freshly, or the process is not going to be provoked. Noting a likeness or resemblance between two things in nature can provide this freshness, but I think there must be more. For example, to perceive that the behavior of certain tree leaves is like the behavior of birds' wings is not, so far as I am concerned, enough to justify the sharpening of the pencil. There has to be a feeling that some kind of idea is implicit within that resemblance. It is strange how confident one can be about this. I always detest it when artists and writers marvel at their own creativity, but I think this is a very strange thing that most practiced artists would have in common, the certainty that accompanies these initial, provocative impressions. I am almost always right in feeling that there is a poem in something if it hits me hard enough. You can spoil your material, of course, but that doesn't mean the original feeling was false.
Posted by Mike Crowl at 12:36 pm No comments:

Who knows what goes on in a family? I learned this as a student.
'You can spend years with a patient and still they'll surprise you,' Wesley told me after we'd shaken hands for the first time, his fingers yellow with nicotine.
'How so?' I asked.
He settled himself behind his desk, clawed his hair back. 'You can hear someone's secrets and their fears and their wants, but remember that these exist alongside other people's secrets and fears, people living in the same rooms. You've heard that line about all happy families being the same?'
'War and Peace,' I said.
'Anna Karenina, but that's not the point. The point is, it's untrue. No family, happy or unhappy, is quite like any other...'

The Woman in the Window by A J Finn, page 98

The narrator is a child psychologist; Wesley is her tutor.
Posted by Mike Crowl at 9:03 am No comments: