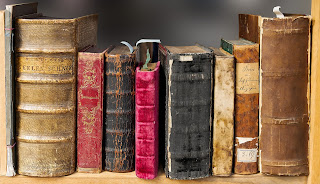 I work with a Chilean man, helping him with his English pronunciation and reading. Today we came across an article in a magazine from 2015 in which the author, Jani Patokallio, wrote about introducing the word p-book (or pbook, or pBook, to use his own variation on spelling possibilities).

He had apparently used this word back in 2000 when ebooks (or e-books, or eBooks) were coming into their own. I think he had hopes that the word would take off as a means of distinguishing printed books from digital ones. He has tracked it since, through a website that I think may have gone the way of the dodo. It wasn't one I recognised.

In the early 2000s the word barely made a dent in the language, though there's been cited more in more recent years. (As in around 20 citations per annum; not really that many.) It seems that people have opted to assume that book means printed book, and e-book/ebook/eBook (does anyone use this latter version?) stands for the digital model.

English language users tend towards ease of use rather than adding things where they don't need them. And since book has stood us in good stead for several hundred years, adding a p in front of it just seems like excess. Mr Patokallio's article uses a number of words not used in everyday English - such as prognostication and neologism - so he's plainly a lover of interesting words, and possibly had high hopes that pbook would take off.

It certainly turns up in online dictionaries, though none of the ones I looked at gave any indications as to the word's origins. I'm not sure whether Mr Patokallio actually made the word up; it sounded from the article as though he may have, but my student and I were too involved in getting through the article with pronunciations intact to worry about finer detail.

You can find some references to pbook (which seems to be the way the word is being spelt) in a few places on Google. None of them are particularly recent, and I can't say I've noticed the word being used regularly anywhere.

pBooks, eBooks, & dBooks: why we are hooked on books and bookness doesn't take us very far in the why we should use pbook as opposed to book, but it's an interesting piece all the same.
Manning Publications talk about registering your pbook here.  I think they're an Indian publishing house.
ebook vs pbooks: a lesson in value, like the first article, is more about the value of books in general, whereas The Buying Conundrum: pbook or ebook? talks more about format.

All of these articles are 2014 or earlier, which rather indicates to me that pbook isn't really taking off. I'd be happy to be informed otherwise!