Bringing the reader up to speed

One of my niggles that turns up again and again in cop shows on TV - the CSI type of thing - is when the detectives stand around in their office and spout exposition. I don't mean one of them telling the others what's happened, but four or more of them each telling each other what they already know. They're only doing this so the viewer knows as well.

Character A knows exactly how much to say before character B takes over. Character B then gracefully gives in to character C who somehow knows which bit of information to supply before character D finishes the thing off. Occasionally they swap this approach around: BDCA, or the like. But it's not as if they're discussing it. Pity the poor actors trying to make this look remotely realistic.

Of course, we're not talking about real life here, but we are talking about drama. And how odd it is to find TV scriptwriters reverting to this type of exposition-giving. It was dealt the death blow in the theatre after audiences got tired of too many butlers and maids coming on stage in the first scene and cheerfully telling each other - and the audience - everything they needed to know. 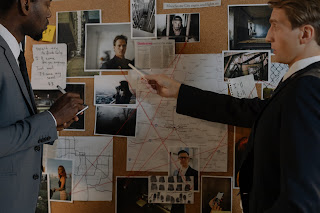 Why this approach has come back into fashion in these cop dramas on TV I don't know, but it seems like lazy writing to me. Blake Snyder, in Save the Cat, talks about how exposition can be dull in a movie if you don't mix it with some action. He talks about the 'Pope in the swimming pool' - a scene in which exposition is given while the Pope is having his daily swim. The audience listens to the expository material while wondering about the fact of the Pope being in a bathing suit, or their surprise at there being a swimming pool in the Vatican in the first place. The scene gives exposition while there's visual action - even if it's mainly swimming. In Hellboy, a good deal of exposition takes place during a World War II battle. In other words, a visual event is going on while we're picking up what the story is about.

It's necessary in novels too. No one wants to wade through a couple of characters bringing the reader up to date in an opening chapter. Inventiveness is needed.

In my children's fantasy, The Disenchanted Wizard, a good amount of background information was given while the characters raced up the stairs and along the corridors of a mental hospital, all the while keeping an eye out for staff who might catch them being where they shouldn't be. In my current WIP, I have a helicopter playing a noisy and increasingly dangerous part as one character tells the heroine what she needs to know. They're in increasing danger of being wiped out of the sky by this very solid and noisy machine.

Exposition can be fed to the reader in small doses over two or three chapters. If you need to bring in larger chunks of it, give the scene another element, something that keeps the reader's mind on its toes. The reader wants to know the background to the story, but will be more involved if it has to engage with other (preferably relevant) things at the same time.

Photo courtesy of Pexels.com - one of the few sites that still offers free images that are free.

Posted by Mike Crowl at 3:10 pm No comments: