The Psalms: prayers for all the time

I ran a Christian bookshop in the 90s and the first decade of the 2000s. One of my customers introduced me to Dale Ralph Davis’ books. He’d written helpful - and often witty - commentaries on the books of Joshua through to 2 Kings. I’ve read them all repeatedly since then.

Davis has more recently written books on the Psalms. There are now three of these books, each one looking at around a dozen Psalms. The books began life as a series of sermons he’d preached in his home church. He reminds us that though some of the Psalms are statements about God and life, primarily they’re prayers.*

Davis has the knack of digging deep into the words on the page to give us a greater understanding of what the original writer was saying.  He clarifies things that may puzzle contemporary readers, and encourages us to listen to what God is saying through these ancient words.

It’s my habit to read something from the Bible every day. The Book of Psalms is amongst my favourite sections of the Bible, and I’ve worked my way through it a number of times. Nevertheless, some days my mind skims through the words because, after a number of readings, they’ve become very familiar. (At one point some monasteries used to work their way through the entire book of 150 Psalms every week. That would make them very familiar!)

Why are the Psalms so valuable? Why should we use them as examples of the way to pray? Didn’t Jesus give us a short and easy prayer that covers everything?

I’ve thought about this last question. The disciples, even though they were classed as ‘unlearned’ men, would have heard the Psalms over and over in the synagogues. Why did they ask Jesus to teach them how to pray? Did Jesus offer them anything new?

He gave them something concise, but I suspect he didn’t intend this to be the only prayer they should ever pray. The Christian Church agrees: while the Lord’s Prayer has high priority, the Church has always used the Psalms as part of its prayer life, as well as writing countless other prayers for use in liturgies throughout its history.

Not only that, but the Lord’s Prayer has nothing in it that can’t be found in the Psalms, or at the very least, elsewhere in the Old Testament. Maybe Jesus was getting them to focus on essentials in this short prayer.

So do we 21st century people need to use the Psalms as prayers then? Davis would say, Absolutely. The importance of the Psalms is that they show us how prayer can take a wide variety of forms. Some of these may not connect with us personally at all: most Westerners won’t tend to pray for our enemies’ babies to be dashed against the wall, but I imagine there have been believers throughout the centuries who have been in such anguish about their circumstances that similar thoughts have seemed appropriate. Even today such believers might be African, under attack from violent opponents; people under Communist rule, or those having their lives wrecked by ISIS and the like.

But there are plenty of other reasons to use the Psalms. Without their assistance, it’s easy to get into a routine of prayer, feeling as though you’re saying the same things over and over. And feeling, often, that God doesn’t hear you.

The Psalms give us the means to come to prayer in a fresh state of mind. They enable us to see that we’re not the first to feel God is silent when we pray, nor are we the first to feel immense anguish and bewilderment while praying.

The Psalms offer us ways to rejoice in prayer, to bow in worship, to exalt God for all he does and for all his blessings to us.

I mentioned earlier how we can slide over words that become too familiar. Years ago I began to memorise portions of Scripture, including a number of the Psalms. (I won’t boast about the fact that a couple of years ago I finally committed all the 176 verses of Psalm 119 to memory. Whoops! I just did.)

Memorising Scripture opens the words up to us in a different way – just as memorising poetry does.  Instead of the words being either too familiar, or too difficult, we discover as we commit words to memory that we get a new clarity about what’s written. Moreover, if we continue to revise the pieces to make sure we don’t forget them, we find them becoming part of our bones.

This provides another benefit.  There’s nothing quite like a Psalm to still your mind in the wee hours of the morning, when sleep refuses to come; or to have those familiar lines come to mind when life appears to have gone askew.

* Davis' books on the Psalms have memorable titles:
The Way of the Righteous in the Muck of Life
Slogging Along in the Paths of Righteousness
In the Presence of My Enemies 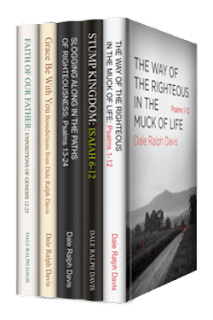 Posted by Mike Crowl at 2:52 pm No comments: