The pianist who plays for the choir I conduct - the Choristers - has been cleaning out her house. She handed me a twenty-six-year-old newspaper cutting today: it was something I'd written for the weekly column, Column 8, back in November 1991. It's a little negative to start with, but improves as it goes on.

A group of heroes work in our city show conditions would make most wharfies pale. I'm talking about music teachers.

And I speak from experience - for a few years I taught piano from three till whenever, after spending a frenetic morning as a postie. I must have been mad.

Utter dedication is required of anyone who decides to take on this job as a permanent career. (I didn't.) The frustrations from pupils who don't work combined with the frustrations from those who do work but will never play anything with the slightest hint of musicality, have to be experienced to be believed.

One in a hundred pupils may have the spark of musical life in them; the sort of spark that makes you think they may achieve something. The other 99, however earnest they may be, will fall by the wayside, and during their mid-life crises will gloomily say, 'I wish I'd carried on playing the piano.'

Or worse, 'Why didn't Mummy and Daddy make me practise?' Have you ever tried to make a child practise? Their attention manages to be focused on everything but the keyboard.

Music teachers sit for hours in the same room, often seeing only an endless stream of children. It's like being a solo parent. The occasional adult pupil may or may not be a bonus, depending on their reason for learning.

When other teachers are enjoying up to eight weeks' paid holiday per annum, music teachers are forced to spend those same weeks unemployed, eking out the income they've earned during the rest of the year.

And in spite of using new material as it appears, the basic details of what they teach hasn't changed much in decades: there is no New Music to go alongside New Maths. Scales are scales are scales. They have to be learned. However much most pupils may dislike them, (I used to enjoy them actually, but then I'm a bit unusual), no musician worth his salt can afford not to learn them.

I write with a sense of awe to think that one of my former music teachers has been teaching for nearly 60 years. 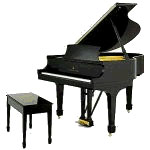 Originally she lived and taught in Sawyers Bay. She commuted to Port Chalmers to teach as well, but being without a car (of course), she had to walk. Usually it only took half an hour. It took somewhat longer in the Big Snow.

Later she rented rooms in town, and still later, during the war, had a room in the Glenpark Presbyterian Hall. When she calls it the 'dug-out' or 'dungeon', you have a pretty good idea of what it was like.

Mice were frequent visitors. Boy pupils had to empty the mousetraps, to their disgust. (I'm pleased to say I was still a twinkle in my father's eye when the war was on.)

By the time I was her pupil, she lived in a pleasant house in Mornington. The comfortable music room was built over the garage; moving the two pianos up there must have been a nightmare.

Sounds like music teaching pays after all, I hear you say. Well, maybe it does, if you're prepared to put in endless hours of dedicated and concentrated work, you only contact with the outside world being your pupils.

So all hail to music teachers - they never go on strike. Many workers who do hardly know they're born.


A few notes: The teacher's name was Olive Perry. She never married, and her mother lived with her until she died. Olive herself has been dead for a number of years. Her house was actually in Maryhill, only two minutes walk away from where I now live.
The Glenpark Presbyterian Hall was replaced at good while ago, perhaps fifty years. The new one has no dungeon, and probably fewer mice.
At least one of the two pianos in that upstairs room was a grand.

A short letter to the Editor was attached to the clipping. Unfortunately there's no indication as to who wrote it.

In his column today, Mike Crowl has some nice things to say about music teachers and some less kind things to say about the job itself. Perhaps it's not really so bad. The one thing I've noticed over the years is how many music teachers keep on going to a ripe old age, many well into their 80s. Is it a 'soft' lifestyle that allows this, or is it the daily challenge of taking each of their pupils just one stage further that keeps them alert and active?

The pianist who gave me these two clippings commented that she has been teaching for nearly 70 years. Another teacher in the city, a man, has only recently retired: he's in his early 90s. Miss Perry herself certainly taught for a long time.
I wrote Column 8 for around five years in the early nineties.

Posted by Mike Crowl at 5:01 pm No comments: