One of the hardest things I find to write is an action scene.

There's a theory that when there's lot of action you should take your time over it, writing more rather than less. And I think this is useful. Most readers will have noted how, when the climax of a story is coming, the author gives more and more detail, expanding the big moment, even though it may in real terms all be over in a couple of seconds.

I'm in the middle of the draft of my fourth children's fantasy. It doesn't have a name at this point, so it's just book four. It picks up some leading characters from the other three books and throws them together in a new story, but one that hopefully connects back to the earlier books.

I've got a note to myself that in the climax of one chapter, where a villain is (probably temporarily) dealt with, that I need to fill this out more. Everything is over for the villain in a couple of sentences.

But today I've been trying to write a small fight scene, where the three main characters overcome three people on the opposite team, as it were. They can do it, but getting it all down on paper has required considerable writing and rewriting - even though this is still only the first real draft of the book. I don't want to skimp at this point because it's likely that what happens here will affect later scenes.

Who does what to who at which point, and who gets in first, and how do the baddies retaliate, and so on, all have to be taken into account. If I'm not careful the baddies could easily end up winning the scene!

When my co-writer and I were working on the play of Grimhilda!, which came before the book version, we spent hours on making sure that on stage everything in the fight scene at the end would work. We made sure there would be time for a character to move from here to there before someone else did something to them...and so on. And then the director came along and ignored all our stage directions! I know that's not unusual, but when things work in the script, it's possibly wise to at least try those things out before changing them!

When I'm writing a book I'm not only the scriptwriter, but the director as well. This has its advantages, but it means you've got to careful to keep things tight as well as clear. You can't give one of your characters the upper hand by extending out how long they have to win when the rest of the characters have much less time. (Though you do see this done in the movies all the time.)

While your readers may be so excited at the fight itself they'll allow you as the author to get away with certain inconsistencies, I think it's valuable to know that if they fight was staged for real, it would work. Just one of those little disciplines we writers have to live with!

I wrote around 2000 words on the new book yesterday, but twenty-four hours later think that some of that writing will have to be scrapped.

That’s how it goes on the first draft.

I work best, it seems, writing something down – anything – rather than trying to think ahead without having already done that investigative writing, the writing that 'finds' the story, in a sense. The Disenchanted Wizard was done this way. It was written and rewritten; whole chunks and chapters were scrapped. While it often seemed a hard way to work, the book was eventually all the better for it.

Not everything in the finished book appeared in the 'first draft.' Some things appeared in exploratory notes where I mulling over what might happen. Early in the process I wrote two chapters about the night the Dog (later to be the Wizard) was sent into the map. These never got into the book in any form. One of the characters present in those chapters vanished entirely from the story in due course, even though in the very first draft he’d been the catalyst for what happened to the heroine. However, the events from those two chapters, in a modified form, were scattered about in bits of exposition in the final book. The sense that they’d been ‘real’ at some point in the writing process helped to make the exposition clear and concise.

I recently read Andy Martin's book, Reacher Said Nothing, in which Martin sat in on Lee Child's writing process during the course of the writing of the book, Make Me. 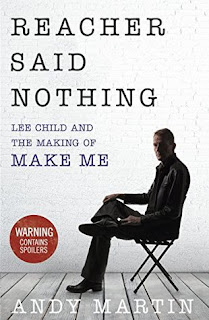 I need to put things down in order to be able to think. What I put down may seem dislocated and shapeless, especially when it's in note form. I don't regard these notes as planning the novel structurally, by the way, and anyway, they often arise after I've started to write the first draft, especially when I've got stuck. But those notes usually spark off the next stage of writing.

Sometimes I just have to stop completely, because things are flabby, and the first attempt at writing a scene means I've come up with something less than interesting - to others. Or I've used the same escape technique one time too many - as I suspect I have in what I wrote yesterday. At that point it takes an outside eye to tell me I can do better. I don't enjoy being told I can do better, but the books are always better for it...!

I used to write a weekly column. Very early on I learned that people give you much more credit for your supposed knowledge than you deserve. I wrote about rhododendrons once, and had people ringing up for advice on how to look after them. I had no more idea than they did. So I was intrigued to come across the following quote from Kingsley Amis, in which he (rather tongue-in-cheek) discusses his writing techniques. This item first appeared in The Listener UK, though I found it in a Readers Digest April 1990.

There are one or two little tricks of the trade you learn by writing a lot of novels: how to handle transitions more smoothly, get your characters without fuss from one scene to the next. And you get better at what might be called the tip-of-the-iceberg con. You imply that you know everything about a subject – for example, eisteddfods – just by quoting two or three little bits. The implication being, ‘I could tell you all about it if I had room, but I’m just letting these little bits out. That’s the tip, but there’s a huge iceberg.’ Of course, there really isn’t iceberg.

This second quote was also in that Reader's Digest. It originally appeared in the Esquire magazine, and it has Columnist Bob Greene discussing his profession:

I do not lift heavy objects; I do not manufacture things. What I do is to go out and see things and meet people, and then I put it all on paper for strangers. That may not sound like work – sometimes I can’t believe I get a pay cheque for it. I have been writing a column for over 18 years, and I have become virtually incapable of experiencing things and keeping them inside myself.
I talk to people and notice things, and then I turn those things into a column for the most wonderful gift a storyteller can be given: an audience on the other end. The way I see it, everyone of us in the writing business starts off with precisely the same tools: the 26 letters of the alphabet. All we can do is try to arrange those 26 letters in a different way than anyone else has before.
Posted by Mike Crowl at 5:21 pm No comments: