The Law of Human Nature

This is another post of quotes from books I've read recently. These two occur early in C S Lewis' Mere Christianity, which I've certainly read a couple of times, if not more. It isn't always an easy book, and you wonder, when the first sections were broadcast as talks, how the listeners were able to keep up. Plainly they did, and the enthusiasm for the talks was such that they were very quickly published in the form of three separate pamphlets, and then into a single book. This book remains one of the top-selling Christian books of all time, and has been instrumental in changing the lives of many a reader.

The law of gravity tells you what stones do if you drop them; but the Law of Human Nature tells you what human beings ought to do and do not. In other words, when you are dealing with humans, something else comes in above and beyond the actual facts. You have the facts (how men do behave) and you also have something else (how they ought to behave). In the rest of the universe there need not be anything but the facts. Electrons and molecules behave in a certain way, and certain results follow, and that may be the whole story.* But men behave in a certain way and that is not the whole story, for all the time you know that they ought to behave differently.

Notice the following point. Anyone studying Man from the outside as we study electricity or cabbages, not knowing our language and consequently not able to get any inside knowledge from us, but merely observing what we did, would never get the slightest evidence that we had this moral law. How could he? for his observations would only show what we did, and the moral law is about what we ought to do. In the same way, if there were anything above or behind the observed facts in the case of stones or the weather, we, by studying them from outside, could never hope to discover it.

A little later he says:

Do not think I am going faster than I really am. I am not yet within a hundred miles of the God of Christian theology. All I have got to is a Something which is directing the universe, and which appears in me as a law urging me to do right and making me feel responsible and uncomfortable when I do wrong. I think we have to assume it is more like a mind than it is like anything else we know—because after all the only other thing we know is matter and you can hardly imagine a bit of matter giving instructions. But, of course, it need not be very like a mind, still less like a person. In the next chapter we shall see if we can find out anything more about it. But one word of warning. There has been a great deal of soft soap talked about God for the last hundred years. That is not what I am offering. You can cut all that out.

I love that last sentence! Imagine hearing that while you were listening to the broadcast; it would make you sit up suddenly.

The commonsense of ordinary people 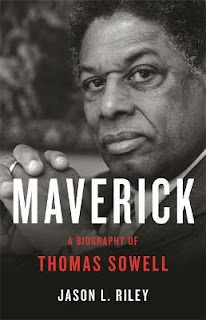 A few weeks back I finished reading Jason Riley's biography of Thomas Sowell, entitled Maverick. It's a great book, and full of quotable things that are especially relevant to our current times. I'm going to go back through my Kindle highlights over the next period of time, and add some of the highlights to this blog. Here's the first:

His early struggles to make a life for himself meant “daily contact with people who were neither well-educated nor particularly genteel, but who had practical wisdom far beyond what I had,” he recalls. “It gave me a lasting respect for the common sense of ordinary people, a factor routinely ignored by the intellectuals among whom I would later make my career. This was a blind spot in much of their social analysis which I did not have to contend with.”

I know some fine academics, people who are attuned to commonsense of ordinary people. But of course, we all know and hear of academics who are not!

Posted by Mike Crowl at 8:47 am No comments: