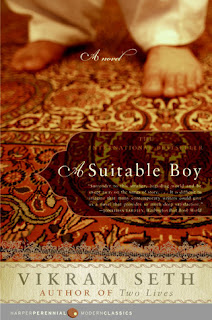 After nearly three decades I'm re-reading A Suitable Boy, that vast (1500 pages almost) and detailed book of life in India not long after the Partition by the British.

It's full of stories, all interconnected, and of people from all walks of life. In the following quote, a politician, L N Argawal, has just been questioned in Parliament about a the recent shooting of several Muslim rioters: a mob of some thousand were planning to attack the foundations of a new Hindu temple that was being built right next door to a Muslim mosque. (The mosque itself had been built on the site of a Hindu temple some centuries before.)

With typical political-speak, Argawal manages to answer very little, particularly to a Muslim female politician who is fired up about what's happened. A little later, he speaks to one of his staff:

'...a good man will not make a good politician. Just think - if you had to do a number of outrageous things, would you want the public to forget them or remember them?'
Clearly the answer was intended to be 'Forget them,' and this was the MLA's response.
'As quickly as possible?' asked L. N. Argawal.
'As quickly as possible, Minister Sahib.'
'Then the answer,' said L N Argawal, 'if you have a number of outrageous things to do is to do them simultaneously. People will scatter their complaints, not concentrate them.' When the dust settles, at least two or three out of five battles will by yours. And the public has a short memory. As for the firing in Chowk, and those dead rioters, it will all be stale news in a week.'
The MLA looked doubtful, but nodded in agreement. (page 278)
This may seem an obvious enough piece of politicking, but it's very relevant to the state of New Zealand politics at the moment: behind all the ongoing stuff about Covid that our Prime Minister spouts each day and which seems to have all her attention, have been a number of other Bills and changes to the life of New Zealanders, some of them snuck in under the radar almost. The idea of doing enough outrageous things to dissipate the attention of the voters seems to be enacted on an almost daily basis in this country.
Posted by Mike Crowl at 7:39 pm No comments: