Moving house and writing up my life 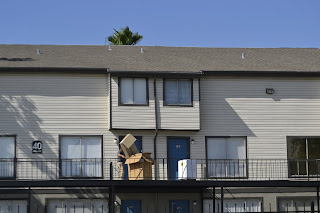 It's been nearly two months since I last posted here - once upon a time I posted most days, sometimes more than once a day.

There's been a lot going on in our household - selling our house, for one thing, and trying to find somewhere else to live for another. At the moment we're 'boarding' with my daughter - who bought our house. So in a sense, things have hardly changed at all. She and her partner and foster boys had already been living in the house a year or more when she bought it, due to circumstances beyond her control. So it was no big change for any of us!

But we are looking for another house. The market, however, has gone crazy in our city. Once you could sell your house and find another easily because it was a buyer's market. Now it's completely the opposite: sellers are the winners, and buyers, if not quite the losers, are certainly having trouble buying something else. The prices are moving upwards at such a pace that if you leave it too long, what seemed a good sale figure on your own house, suddenly becomes not enough when you go to buy something else. And that goes not just for bigger houses but for little townhouses, units, places known as 'doer-uppers' - which usually stands for a place that going to take a good deal more than you paid for it to actually live in it.

When I last posted, I 'reprinted' a piece from 1994 which first appeared in a column I used to write - called Column 8. My intention is to keep on posting these columns (if they're not completely and utterly dated). There were five years of them originally!

But what's held me back from doing that, in part, is that I've been typing up more than 700 printed pages of a journal I kept from 1989 to around 2000. The journal was originally on an earlier computer, and thankfully I kept a printed copy of it. However, it had felt risky for a long time that I only had it on paper, so it's now all back on computer again. Amounting to something like 500.000 words, I guess.

More recent journal notes, from 2000 on, were typed straight onto computer, and copied from one model to another as time went on. And well and truly backed-up online.

When we began to tidy up things that we own in the present house, preparatory to a shift, we got rid of a lot of it. As you do. Including lots of papers and things that were really no longer of value. But I decided to keep a bunch of around 45 exercise books I'd written in over the years. Some of them are completely full; some have empty pages. Most of them relate to my spiritual journey - they might be classed as letters to God. Usually written in the morning, often at white heat (if my handwriting is anything to go by), and, to my surprise, more full of insights than I'd expected. Others relate to the craft of writing - various different approaches to encouraging myself and keeping my writing skills honed.

I've begun typing these books up too, and inserting the entries (which are mostly dated) in amongst the journal entries. It's intriguing how the more down-to-earth journal stuff contrasts with the spiritual. I might not live long enough to complete the task. But I'll give it a go!