A few short extracts from William McIlvanney's Laidlaw, a book full of witty writing. Laidlaw is the first in a series featuring a Scottish detective named Laidlaw. He's a man with a similar approach to his detecting as Rebus has in the famous Ian Rankin series. These stories were written earlier than those by Rankin and are set in Glasgow, rather than Edinburgh. The other two titles are The Papers of Tony Veitch, and Walking Wounded. 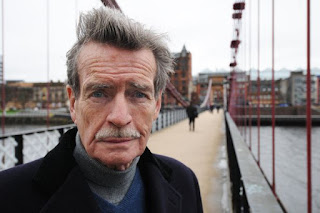 Sunday in the park - it was a nice day. A Glasgow sun was out, dully luminous, an eye with cataract. Some people were in the park pretending it was warm, exercising that necessary Scottish thrift with weather which hoards every good day in the hope of some year amassing a summer.
The scene was a kind of Method School of Weather - a lot of people trying to achieve a subjective belief in the heat in the hope of convincing one another. So the father who lay on the grass, railing in his children with his eyes, wore an open-necked shirt, letting the sun get at his goose-pimples. Two girls who were being chatted up by three boys managed to look romantically breeze-blown rather than cold. An old man sitting on a bench had undone the top two buttons of his overcoat, heralding heatwave. A transistor played somewhere, evocative of beaches. People walking through the park moved unhurriedly, as if through an air muggy with warmth.  page 23

Just because you've got a wooden leg doesn't mean you've got to go about battering all the two-legged folk over the head with it.  page 167

What I've got against folk like Lawson isn't that they're wrong. It's just that they assume they're right. Bigotry's just unearned certainty, isn't it?  Page 200

Posted by Mike Crowl at 1:11 pm No comments:

A rift in the lute 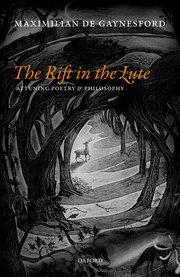 My wife and I frequently do the cryptic crossword that appears daily in our newspaper. Some days it can be so straightforward it's done in a quarter of an hour. Other days some of the clues seem incomprehensible, more like the ones that appear with the Saturday cryptic, which is much harder - though even that one has become more doable as the years go by.

Yesterday we got stuck with a clue that we just couldn't make head or tail of. The clue was "Musical version of someone rocking the boat."

The answer was scattered around the crossword: a four letter word here, a two letter word followed by a three letter word, and then finally another four letter word. We got the two centre words, which were pretty plainly 'in the'. But what was in the what eluded us, even though we struggled with a variety of word combinations for some time.

The answer was 'Rift in the lute", as I discovered this morning, when checking the answers. A rift in the lute? It doesn't even seem to make sense, and it's certainly not an idiom I'm familiar with. How does a lute get a rift? I suppose the word can be being used in the sense of a crack, which would certainly cause a bit of a problem for the lute-player.

Apparently 'rift in the lute' means: "A small problem or flaw in something that jeopardizes the whole. For example, I hope this bit of rust isn't a rift in the lute and doesn't end up damaging the whole paint job." I've never heard the expression rift in the lute. Is anyone else familiar with it?
Supposedly it comes from a poem by Tennyson - Idylls of the King -  in which he writes:
‘It is the little rift within the lute,
That by and by will make the music mute.’

The phrase must be more common than I think. Someone called Maximilian de Gaynesford has written a book with the title, A Rift in the Lute. Go to Amazon and you'll find he's not the only one to use the phrase as a book title. Much and all as Mr de Gaynesford's book sounds interesting - its subtitle is attuning poetry and philosophy - the hardcover price of US$65.93 (down from $80.00) is a little steep. And worse, the Kindle version is only $3.30 cheaper at $62.63. For a Kindle book!

So there we go. I've learned a new phrase, discovered where it comes from, and realised that far more people know it than I'd have expected. Humbled again.
10.8.21 Re-reading this post, I still don't get how the clue relates to the answer. It's bad enough when the answer seems to make no sense, but when the clue requires an extraordinary leap of imagination to solve it in the first place, things have really come to a pretty pass. And if you want to understand that phrase check The Idioms.