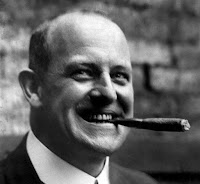 I've been re-reading What Ho! The Best of Wodehouse over the last few weeks, and what a great book it is. There are chapters and short stories in it that are perfect gems of comedy writing.

Towards the end of the book are some letters he wrote to W. Townend - just a few out of the hundreds he wrote - and one in particular is of interest to writers struggling to get their book to come together. Here is a man who had been writing for decades at this point - he was in his late fifties - and yet the first paragraph here shows that even after all his experience as a writer he could still struggle to get things right when it came to the story working out as he planned.

The notes about this particular book are interrupted at the end of each paragraph by comments about other writing he was doing...

I’ve been meaning to write for ages, but I’ve been tied up with The Luck of the Bodkins. I find that the longer I go on writing, the harder it becomes to get a story right without going over and over it. I have just reached page 180 and I suppose I must have done quite 400 pages! Still, it is in good shape now...

I finished The Luck of the Bodkins on November 20th, and ever since have been in a sort of coma. Do you get like that after a big bout of work?...

Meanwhile, The Luck of the Bodkins was coming out with great difficulty. Have you had the experience of getting out what looks like a perfect scenario and then finding that it won’t write and has to be completely changed?...

By that time, I was struggling with the last chapters of The Luck of the Bodkins. Usually when I get to the last fifty pages of a story, it begins to write itself. But this time everything went wrong and I had to grope my way through it all at the rate of two pages a day. I began to get superstitious about it and felt that if I could ever get it finished my luck would be in. On November 29th I was within four pages of the end and suddenly all the lights in the house went out and stayed out. Still, I finished it next day, and it is pretty good, I think. Frightfully long – 362 pages of typescript – it must be over the 100,000 words...

Posted by Mike Crowl at 1:10 pm No comments: