Save the Fantastic Cat

I've been re-reading Blake Snyder's excellent, Save the Cat, as well as reading for the first time his third book, Save the Cat! Strikes Back. They're extremely encouraging for writers, whether screenwriters or novelists, or storytellers of any kind. They give a means to work out structure far more satisfactorily than any other 'system' I've come across, and they offer ways to go back over your work and find flaws, and work out how to fix them.

My mode of operation, however, tends to be that I have to initially write something of the story before I can figure out who the characters are and what they're up to. I can't just take an idea and fill up Blake's 15 beats without that.

In fact, as I've no doubt mentioned before, I've been writing a fourth book in the Grimhilderness series, and it's been going very sluggishly. Procrastination is part of the problem; life getting in the way is another problem; and lack of where to go after a certain point is another. But I do have a bunch of characters who are alive in my head, and I have a number of situations, and a general sense of what the overall story is.

This is more than enough to get started on the 15 beats.

Except that I immediately began to discover that things just weren't going to work, once I started setting my story as it stood alongside Blake's beats. Not because I couldn't match certain things up, but because the hero turned out to be passive, and there was no great reason for him to go on any journey anyway. In fact, if  he had any sense he'd go into hiding. Hardly the work of a hero. So back to the drawing board.

I re-watched J K Rowling's film Fantastic Beasts and Where to Find Them. Rowling's world is so full of stuff by now that she can reference all sorts of things and fans will pick up on them. (I'm not quite so good at keeping such detail in my head as those sorts of fans.) I thought about her story in terms of Save the Cat.

It's interesting to ask: who is the hero? Whose journey are we going on?

Because plainly we have a quartet of lead characters, and the most important of them, Newt Scamander, doesn't go on any great journey at all: he is what he is, unlike Harry Potter, who goes on an immense journey over seven books. Is there a catalyst moment for Newt? I suppose you could find one, and you could find some of the other things that heroes are supposed to have in stories. But Newt is already fully-formed at the beginning of the movie; he doesn't need to change in any great way. Nothing much troubles him - except when there's a threat to his beasts. Otherwise he has a resource for almost every situation and doesn't really need others to help him much.

Which means that the hero who changes is someone else. Snyder mentions this in Strikes Back: the character who isn't quite the main character but who goes through the process of being stuck to having something unstick him to being thrown into a different world to being changed and finally coming back to what he loves but with a different viewpoint.

This is plainly Jacob Kowalski. He starts off on the back foot with no hopes (turned down by the most wonderfully po-faced Bank Manager you've ever seen), with the only life he can envisage being stuck in a canning factory - even though he's served his country in WWI. He is affected by a catalyst - the meeting with Newt and the accidental swapping of their bags. And even though he's the American equivalent of a Muggle, he's thrust in the magical world, and sees all kinds of things he never knew existed. He faces fearsome creatures and learns to love them, and even copes with the horrific rhinoceros-like creature that nearly stomps him to death. And in the end, even though he loses his ability to see magic at work, he gets his much-desired bakery shop and it's a roaring success. And at the very end, Queenie turns up there, and it looks as though his life may change even further.

But besides Jacob, another one of the quartet goes through a considerable journey too, and that's Tina, the kind of magical detective. She's down on her luck as well, having made some mistake in her job, and is reduced to investigating without the proper authority, being put down by her bosses (again) and generally not being able to understand Newt's nonchalant approach to life.

But the things that change Jacob's life change hers too, and she's forced to accept Newt and work with him, stepping into a different kind of world as well, where she has to see that Newt is far ahead of her in the play, and even, in the end, will rescue her from her past when she's threatened with death.

I don't know whether Rowling wrote the script as we see it portrayed in the movie, or whether she wrote the outline and dialogue. However it was done, it's a considerable feat, juggling all the elements that are in it. And if you can keep up with it all, it's likely you'll find Snyder's 15 beats being worked through in their proper order and giving the film a solid underpinning.
Posted by Mike Crowl at 8:17 pm No comments: 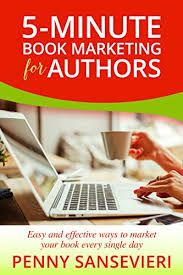 I'm just reading Penny Sansevieri's book, 5-Minute Book Marketing for Authors. I'd thought I'd read it before, but according to the record I keep of books I've read, I haven't. (Still with me?)

Maybe I started it and then it got interrupted by some other book coming along the chute, such as her other title, How to Sell Books on Amazon by the Truckload, which was really good. Anyway, this 5-Minute book is helpful, and has some good ideas in it.

I was reading it at a rehearsal for Don Giovanni, last night, in a spare moment when I wasn't required to play the piano for the singers, and, because she talks in the first chapter about Goodreads, a site I've been a member on for some years now, I decided to download the Goodreads app onto my phone. (I was reading the Kindle version of the book on there.)

To my surprise, I discovered that all my Kindle highlights are available on Goodreads, something that had never registered before. It's not as though they're hard to find, either. That's very interesting. I already keep copies of them on Evernote, because it's helpful to be able to search them, but having them at hand on my phone is also useful.

The format for the highlights is better than the one on Amazon itself where there's only one page and things stretch out for miles. Here each individual book is listed, and you can access the notes and highlights more readily.

I guess this change happened when Amazon joined forces with Goodreads, but I plainly missed noticing it at the time. Well, there you go, you catch up eventually!

Incidentally, one day I'll learn how to spell Ms Sansevieri's name correctly. She has one of those names where I always get the syllables mixed up...
Posted by Mike Crowl at 1:09 pm No comments: