It's taking a bit of time getting used to Blogger's new format. There are some things I like about it, but as so often with these sorts of changes, things that are most useful get hidden out of the way and take some finding. Such as the way to create a new post. You'll look in vain at the top of the posts page for any indication that you can ever create another post, and then out of the corner of your eye, in the far distant bottom right corner is a plus inside a circle. That's the thing to click on if you want to start something fresh.

It's a bit like telling a friend when they're coming to visit. 'You'll find the back door somewhere round the back,' and leaving them to discover that the back door isn't actually at the back, but out of sight around the side of the house that no visitor would ever make their way to.

We stayed at my cousin's house recently while she was away somewhere else. The back door led off the drive where you parked your car (and was one of those that didn't open normally, but required you to pull it towards you in order to get the lock to work). So it was effectively the front door.

To reach the actual front door, however, you had to go through a side gate in front of the front side of the house, turn a corner, and only then discover that the front door was well and truly hidden in a very private garden.

But that's not what I intended to write about today.

I found myself using the expression ‘It’s up the boohai’ this morning when answering my daughter. It's not something I say often, but it’s a handy way of inferring that something’s completely in a muddle. In this case that the local Council's Dog Registration system seems to have got itself thoroughly discombobulated as a result of Lockdown.

The implication that something's gone haywire is the way I’ve always used it, and I think it was how my mother used it as well. We’re not alone in doing so: here's Sam Young citing someone who claims that the dictionary definition of being lost or astray isn't the one he's used to:

I recall that my Dad sometimes used the expression "Up the Boohai" to describe poor reasoning or irrational behaviour. He was a WW I vet and he told me that the term was used by the troops to describe some of the officers' decisions, as in "These are the orders but they're all up the boohai."

Some online dictionaries only give the definition of lost for good, or gone astray. 'Up the Puhoi’ was supposedly the original phrase. Puhoi is a village on the Puhoi River, north of Auckland, where Bohemian immigrants apparently settled. Why you'd get more lost in Puhoi than other places is a bit of a mystery. 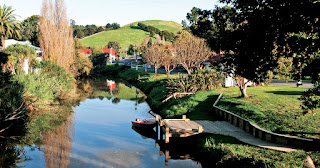 Photo courtesy of HelloAuckland.co.nz
Posted by Mike Crowl at 1:49 pm No comments: