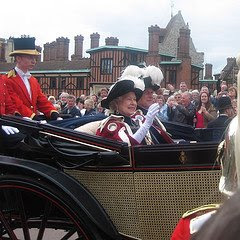 I finished Alan Bennett’s book, The Uncommon Reader, in a couple of days – it’s not only pocket-sized, but also only 124 pages long with roughly 240 words per page (less than 30,000 words in total). Nevertheless he packs plenty of wit and satire into those small pages and the result is a great read.
The Queen comes off as a sharp character who’s well aware of the nature and ambitions of those around her. She may seem like a slightly dotty old lady to them, but she’s been around a long time, and seen a lot of politicians, equerries and other factotums come and go, and she knows how to keep one step ahead of those who try to outsmart her.
Prince Philip is similar to the version that appeared in the movie, The Queen. Preoccupied with his own little world, fairly unintelligent (!) and pretty much unrelated to anything that’s going on around him.
The story is about a period in the Queen’s life where she suddenly discovers the joys of reading – to the detriment of her usual duties. Unfortunately her enthusiasm is shared by none of her staff, except a male kitchen hand, who gets promoted to page boy when he introduces her to the world of literature. Trying to keep one step ahead of bureaucracy within the palace is a bit of a trial, but the Queen is no slouch. The ending of the book, which comes with considerable speed, is delightful.

I’ve done more reading in the last few weeks than I have for a while, in spite of the fact that the play I’m involved in starts on Wednesday, and we have had a fair number of rehearsals of late. Hopefully by the time we get in front of an audience the young man who has one of the bigger parts will have remembered how he escapes from Holland. ‘By train, on foot, by bicycle…’ is the line, but he varies it from rehearsal to rehearsal, even including a boat the other day. I’m just waiting for him to say ‘by bus’ one of these days.
Incidentally, my wife has often suggested we buy a bus for going on holidays, or living in permanently. I can’t say it grabs me as an idea – I think you need to be fairly mechanically-minded to be able to cope with the quirks of a bus’s innards, especially if it’s going to be your long-term home. But certainly checking out other people’s buses has sometimes been fun.
Except, where would I put the piano?

Photo by Inel, on Flickr.com
Posted by Mike Crowl at 2:05 pm