Number eight - and not wire either

John O'Keeffe writes: The poor fathers of Ireland were dealt another terrible blow last week. Well, at least one section of us. Apparently fatherhood may be out of reach for men in their mid-30s, a "new" study suggests. Infertility specialists found that miscarriage rates increased significantly when the prospective father was older than 35, while pregnancy rates dropped after the age of 40.

You could have fooled me, mate. There's me at 44 years of age, minding my own business and -- hey presto -- seven weeks ago, a fourth child, a brand new PPS number arrives on the payroll. That's right, all the fours -- number four at 44 -- yet according to this "new" survey it's a wonder I can dress myself in the morning, let alone father a child.

All this discussion of children and pregnancies is pertinent to us in our household today, as I've just become a grandfather again - the eighth grandchild arrived at lunchtime today, so keen to get into the world that he's a month early. He might have come a week ago, in fact, but he 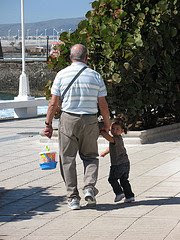 obviously decided it was a bit too cold to get on with the actual process after his mother's waters broke.

Admittedly becoming a grandfather is even easier than becoming a father (as far as the blokes are concerned) but it still brings its own peculiar joys and woes. I'm sure there are grandfathers out there who don't give a stuff about their offspring's offspring, but I'm not in that category. I take as much interest in my grandchildren's lives and activities as I took with my own children's - though admittedly I don't have anywhere near as much responsibility this time round. Which is cool.

Anyway, O'Keeffe's article is lots of fun, and he makes a good case for Dads being older rather than younger...
Posted by Mike Crowl at 2:45 pm