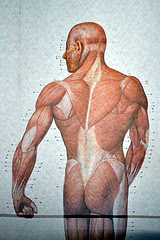 I have to say I love this quote I found today...

Creatine is a dietary supplement that is promoted for its ability to enhance muscle strength and physical endurance. A study with ALS mice found that the mice had significant improvements in their survival with creatine.

The site it's on belongs to the Spastic Paraplegia Foundation. Please note that by quoting it I'm in no way denigrating the people at SPF; they mention creatine primarily to point out that it's useful for people with spastic paraplegia. What I liked about the quote was its reference to the mice.

However, my introduction to creatine, which came only moments before I found that quote, was via a site that promotes creatine for people who want to boost muscle power. Like many other supplements, creatine didn't of course start life as a dietary supplement: it's a compound formed in protein metabolism and present in much living tissue. It is involved in the supply of energy for muscular contraction. In other words we already have creatine in our system - and wouldn't do well without it.

Synthetic creatine, like many body-enhancing drugs, (if 'drugs' is the right word here) has a bad press in some countries and not others. In France it's illegal to use it for muscle-building; in Italy it's not. As a dietary supplement it's available under a number of trade names. I must admit that if I thought the reference to mice was amusing in the first quote, some of these trade names leave themselves open to speculative comment: Myoswell. Creakic Hardcore. Con-Cret Concentrated Creatine.

Myoswell? What were they thinking?

Creakic Hardcore? Quite apart from the first word, which to my ear immediately evokes a creaky old person trying to pretend to be a muscleman, the addition of 'hardcore' just provokes mirth - to me. But I'm not a serious supplement user, of course.

Con-Cret Concentrated Creatine - nice and alliterative, but the hint of 'concrete' in the hyphenated word is a bit scary...will your muscles turn to concrete (hardly much use when you're trying to be active)...?

Sometimes brand names need just a touch more thought before they're foisted on the public, I think..