As has been the case with most days recently, it was beautiful and hot on Saturday, and many of the brass banders would have been happy to have sat outside relaxing, I think, instead of having to perform before audiences.  Still most of them survived, and we had some good placings amongst the folk I played for, including two or three firsts.

In the evening my wife and I went to a 6 pm showing of The Best Exotic Marigold Hotel which has a cast that most directors would die for: director John Madden somehow managed to corral them all together for this relatively slight piece that's made enjoyable because of the people in it.  It concerns a disparate group of oldies who independently decide to take up the offer of a particular Indian hotel to accommodate them in what is effectively an old people's home without the use of that phrase.

Judi Dench takes a leading role, along with Tom Wilkinson, Bill Nighy, Maggie Smith, Celia Imrie, Penelope Wilton and Ronald Pickup.  Dev Patel, from Slumdog Millionaire, is the hotel's young proprietor, a man with more ambition and ideas than commonsense.   Of course all works out well in the end - for him, anyway.  One or two or the oldies come a bit unstuck in the process.  Penelope Wilton, unfortunately, is saddled with the role of a whining woman who just never shifts from that position.  It's not far from her rather petulant mother in Downton Abbey, and it would have been nice to see her in a different kind of role. 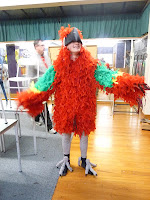 Sunday, after church in the morning, I went to the rehearsal for Grimhilda!  Things are a long way from perfection, but we're getting there.  I've been acting as répétiteur (the common name for rehearsal pianist, but used less now than it used to be) for the rehearsals, and it's interesting to find that even though I wrote the music there are times when I don't seem to be hitting the notes too well.  Of course, when the music was being written, I was playing it all the time.  Now that the writing is some months behind me, it's becoming like any piece of music does when you don't practice it regularly: a bit slapdash.  Still, répétiteurs commonly don't play all the notes, so I'm not doing anything unusual!


At the rehearsal last night I took a photo of the Parrot in his (still to be slightly amended) costume: you've no doubt already noticed the photo.  It's not the best picture, and we'll get some better ones done in due course - this is just to give you a taste of the colour of this particular costume...


On Sunday evening, I had to play for a local singer, Sarah Oliver, in a concert put on by the NZ Foundation Youth Pipe Band.   The band was doing a very quick tour of NZ (four rather scattered centres) and then heading off to Sydney for an Australian contest.  Sarah was a guest artist, as had been other singers in other centres.   The rest of the concert consisted of performances by the NZFYPB - a group of young pipers and drummers from around the country, some dancers and a local pipe band from John McGlashan College.


Sarah and I ensconced ourselves in a small dressing room, with the door shut, because the noise of the pipes in a theatre that size was pretty loud and made its way through all parts of the building.  The pipers were a talented bunch, there's no doubt, as were the drummers.  Very sharp and accurate and in general a credit to New Zealand.  I hope they're doing well in Oz.