Not quite racking the brain

Just looking through my clippings and came across this interesting paragraph about computers and artificial intelligence: 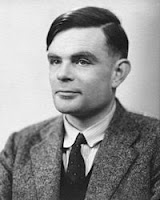 This extract comes from a delightful article in The Atlantic, was written by Brian Christian, and mostly focuses on the Turing Test.  Mr Turing has been in the news a bit recently, because there's now some question as to whether he committed suicide, or died accidentally...or (shock, horror!) was murdered.  Always the conspiracy arises at some point.

I started out checking the clippings for references to bikes, and was reminded that Turing was a cyclist: ...in the first week of June each year he would get a bad attack of hay fever, and he would cycle to the office wearing a service gas mask to keep the pollen off. His bicycle had a fault: the chain would come off at regular intervals. Instead of having it mended he would count the number of times the pedals went round and would get off the bicycle in time to adjust the chain by hand.

And why was I looking for references to bikes?  Well, I was actually looking to see if I had anything about bike rack for cars - but I didn't.  Never mind, it led me back to a couple of interesting spots, and that's always following up on a Tuesday morning.
Posted by Mike Crowl at 11:46 am