We've been watching the first episodes of the outstanding Italian TV series, Inspector Montalbano. When I say 'episodes' I'm actually referring to full-length TV movies; the episodes run to about 100 plus minutes each.

They're set in Sicily in the fictitious town of Vigata, and feature the blunt and muscular character of Montalbano, a man who admits that he's better at being in charge than deputizing, and who, in spite of his gruff exterior, has a solid emotional core. He runs his troop of underlings with an iron fist, although his lieutenant, Fazio (Peppino Mazzotta), knows that much of his behaviour is bluff. On the other hand, he's quick to complement those who do well - though the complement may be somewhat backhanded.  He has little time for superiors who don't do their job well, and is more likely to insult them as kowtow to them. He can interview a suspect to the point where the person finally gives way and reveals that they truly are the murderer, something Montalbano will have known all along. And he's not above bending the official rules in order to allow someone to go free who shouldn't get into further strife, or to investigate a person's apartment while the person is actually there (or even when they're not there!). 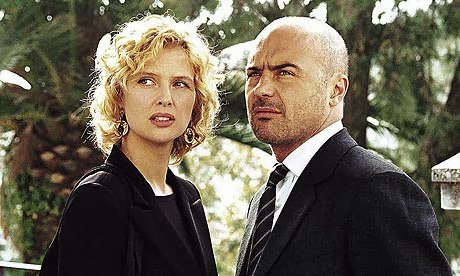 Luca Zingaretti was born to play the role it seems, and certainly he's spent a good few years at the sharp-witted detective, from 1999 to 2013, in some 26 stories. His longsuffering girlfriend, Livia, is played by Katharina Böhm, an Austrian actress. Though Böhm appears to speak the lines, she's in fact voiced by an Italian actress, Claudia Catani. They're supported by a marvellous cast of regulars and one-episode actors, and the production values are superb, the photography in particular.

We've got a 3-DVD set out of the library of the first episodes. I don't know whether there are more available but we'd be happy to watch them if there are, English (sometimes odd) subtitles and all. Subtitles mean you have to concentrate more than usual - especially at those times when the Italians are explaining at an express train speed, and the subtitles are barely keeping up with them.
Posted by Mike Crowl at 9:16 pm