I don't remember ever seeing The Lavender Hill Mob before, though it's a film I've heard about since I was a kid (it came out when I was six) and have wanted to catch up with for a long time.

I finally caught up on it on DVD yesterday, and what a joy it is. It has a wonderful cast, led by Alec Guinness (with a wonderful inability to pronounce the letter R) and Stanley Holloway (seemingly full of his own importance, but a softie at heart), along with Syd James and Alfie Bass (as two small-time crooks brought in to help the completely inexperienced gold thieves, Guinness and Holloway). Charles Crichton takes T E B Clarke's daft script and gives it all he's got. What a team they were.

The premise is that the extremely mild-manned Guinness, who accompanies gold bullion from the factory to the Bank on a regular basis, has hatched a plan to snaffle the latest shipment. He just needs an accomplice who fits with his plan. Holloway, whom he meets by accident, runs a small factory making gewgaws (the Factory's name, in fact) for the tourist trade. Amongst these are metal Eiffel Towers which are painted gold and sold to tourists...in Paris. If the towers are actually gold, and not just gold-painted, they can be easily shipped to Paris and stored there for future sale to those who are in the market for illegal gold. The two work together and everything goes well, until... 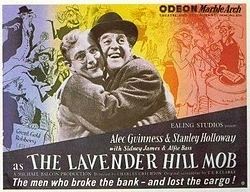 Well, you have to watch it to see how complicated it gets, but the result is a delight. There are so many wonderful details: Alfie Bass is the tiny little crook, but his shadow as he climbs through a window is enormous; Guinness wearing a knotted handkerchief on his head as they pour the gold, an angelic smile on his face; the crazy attempt to get through French customs where they're constantly sent back for yet another check by the annoying French officials; the totally daft car chase at the end with police cars chasing each other rather than the 'villains', an American driver's car aerial getting entangled with the police aerial so that Old MacDonald has a farm goes out to all the police cars, and a policeman, hitching a lift with Guinness and Holloway rousingly joins in the song.

Or the old lady who lives in the same boarding house as Guinness and Holloway and who asks, in crime detection language, if the police have sorted things out. And the woman who owns the boarding house, a harridan of sorts who's only four foot something high. Or the way Guinness is supposed to be roughed up by his co-villains, and isn't, and has to do the job himself while tied up with rope and blindfolded. It's endlessly inventive, and much of the humour is hard to describe because of its particularly cinematic nature.

The wonderful Britishness of it all is another marvellous aspect. Was Britain ever really like this, with comic faces and eccentric attitudes on every street corner? It's hard to know, but those who made the Ealing Comedies certainly thought so, and they've left a picture of Britain for us that is heartwarming and hilarious.

Oh, and watch out for the tiniest of appearances from Audrey Hepburn, near the beginning of the movie.
Posted by Mike Crowl at 11:33 am