We caught up with the movie, The Savages, last night. It stars Laura Linney and Philip Seymour Hoffman as the Savage siblings, Wendy and Jon, whose father Len (Philip Bosco) is heading into dementia. Initially each of the three lives in a separate part of the USA, she in New York, where she's working as a temp while trying to get her plays funded for production; he in Buffalo, and the father in Sun City, Arizona. So there's a great deal of contrast in terms of locale from the dourness of New York, to the winter snow of Buffalo, to the blazing sun of Arizona - even in the winter.

The father has been living with an old woman who dies suddenly early in the movie. His actual wife is still alive, somewhere, but it's never said where - she's a bit of a mystery to all the family it seems, and wasn't able to do the 'mother' thing. Apparently the father had been quite brutal with his son, in the past, though this is never explored in much detail, even though it forms an important aspect of the play Linney has written. 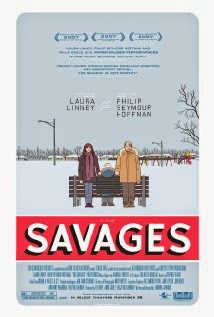 It all sounds like a grim story, but in fact it's done with a curiously light touch, so that we can empathise with the characters in spite of their self-focuses. Linney in particular makes a wonderful job of alternatively making us very annoyed or sympathising with her inability to see herself as she really is. Hoffman plays in that wonderfully understated way he was so good at; little on the surface but much beneath. He's a warmer character, inclined to burst into tears at a number of things, but particularly in relation to his current girlfriend who's leaving to go back to Poland because her visa has run out. He has a wonderful scene in which he's strung up in the doorway trying to get his back (shoulder/neck?) back into place. The material looped under his chin means he can just speak and no more, and then Linney gives him a piece of toast which he can only just nibble at. It sounds like nothing, but Hoffman makes it a delight.

The movie, scripted and directed by Tamara Jenkins, doesn't explain itself too much. It lets us work things out for ourselves, because much of what we discover isn't actually spoken aloud. And there's a wonderfully ambiguous line just before the last couple of scenes when Linney finally dumps her adulterous older boyfriend (he can't even talk about the possible death of his beloved dog without immediately switching to talking about having sex). She calls down the stairs to him: It's not about us. It's in answer to a question he's asked and we think at first she's referring to their relationship. In fact, this proves not to be the case, and we realise a little later that she's finally matured in some areas of her life.

The film manages to walk the tightrope between comedy and tragedy by including a number of bit players in roles that verge on the absurd, and the opening scenes themselves, set in Arizona where elderly people fight the fight against ageing in all sorts of ways, are shot as visual jokes. The film was highly praised at the time of its release but seems to have been mostly forgotten since. However there's an article on Hoffman in Salon.com which mentions his part in it; the writer plainly thought the movie deserved better than to be forgotten.