Somewhat quiet on this particular front

Things have been very quiet on here of late, for a number of reasons. We were away on holiday for a week, and the weekend before that, my daughter and her son moved out of our house - after eight years occupancy of the first floor. Sad to see them go, since my grandson has pretty much grown up here, but they're not far away, and we'll see them fairly regularly, I guess.

In the weeks before that, and again this week, I've been repetiteuring for Opera Otago's production of The Christmas Carol, an operatic version by New Zealand composer, Philip Norman. This has been full-on, with rehearsals every day of the week. I'm also going to be one of four keyboard players during the performances (the original orchestral score has been rearranged for the four of us), so that's another thing that's had to be worked on. Good for my brain and for the fingers, which need to keep working otherwise they stiffen up, but tiring nevertheless.

Just today the Production Manager was looking for a person to work on the sound for the show. I suggested the guy who did the sound for Grimhilda! back in 2012. He was very good, and very helpful. I'd like to say he'd be able to use a Behringer x32 to do the work, but I doubt if that's going to be likely. It'll be some old machine that's been around the theatre scene for a few years, I suspect. The Behringer is a super-modern digital affair and has all the bells and whistles. The photograph below probably doesn't do it justice:

So who was Behringer, you ask? (As I did myself.) His full name was Uli Behringer and he founded his audio equipment company in 1989. Not that long ago in historic terms, but probably centuries in audio terms. His original company has now become of the leaders in the field, marketing in a wide variety of countries. Here's another interesting bit of information (since I know you're keen to learn everything you can from this post). Behringer has perfect pitch; hence the 'ear' on his company's logo. 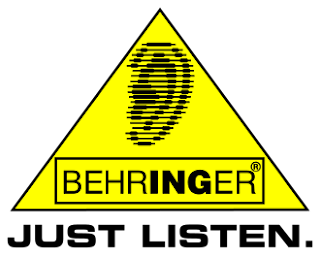