Dave Freeman, the man who wrote the book, 100 Things to Do Before You Die, died after completing only around half of the list.  Ironically, he died not while doing one of the many adventurous things he wrote about, but at home, after falling and hitting his head.

This book, and all the imitations of it, from 500 CDs You Must OwnBefore You Die, (what happens then?) to 1001 Movies to See Before You Die, all assume a long life, as well as plenty of money and spare time.

For people who don’t regard death as the end of everything, such lists might not be so relevant, but for people who believe this life is all there is, then perhaps these lists gain importance. Regrettably, making collections of escapades or movies or music is never going to be completely satisfying. You’re always going to be worrying about the things that aren’t on the list. And whether, like Freeman, you’ll actually make it to the end of your inventory.

And it also depends on whether you can afford to contemplate starting any one of these lists in the first place. For most of the world’s population, managing to get to a recent movie is an achievement, hearing good music is a privilege, and travelling to places you want to go (rather than just places you can afford) is a luxury.

In the movie, The Bucket List, Jack Nicholson challenges Morgan Freeman to live out the dreams he’s written on his bucket list – the list you make before you kick the bucket. But Freeman could never afford to do some of the things he’s listed, and it’s only because Nicholson is a multi-millionaire that they can manage to set off at all.

There’s some hint in the movie that a certain degree of realism needs to come into achieving things on a bucket list. A certain degree: the two characters have been through cancer treatment but appear to suffer few ill-effects from their scampering around the world. (That is, until both of them die at the end of the movie.)

But apart from health, there’s the difficulty of up and leaving family, or jobs, or responsibilities. The people who make these lists often seem to have a casual attitude towards the more stable aspects of life

I think most of us could come up with a list that would be far more satisfying (and far cheaper) than the 100 Things/Die type of list, if we thought about it.

For example, a list with just one item in it: One God to get to know before you die.

Or a slightly longer but still manageable list: 3...5...7 family members to make up with before you die.

Or a list that takes a bit of stepping out of the comfort zone: 95 homeless people in my town to help before you die.

These may not at first seem to be exciting and adventurous.  But I’m sure you’ll get a lot more long-term satisfaction out of achieving them. 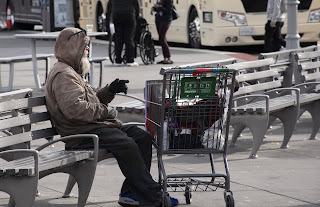 Image by aga2rk from Pixabay
This piece first appeared on the now defunct site, Triond, in 2008
Posted by Mike Crowl at 3:54 pm