In the dog box 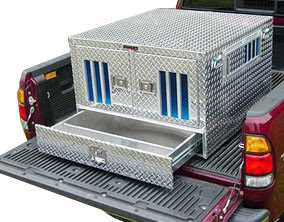 It’s strange how isolated moments from a long-distant conversation will stick in your memory, almost to the point that you can remember the exact words from a sentence. I was reminded of this when I came across the words dog box today.
When an artist friend and his wife were redecorating their house, they used to sleep at night above the ceiling. Now they weren’t enclosed in a loft or attic; the ceiling at this point consisted of nothing but the beams, and a bit of boarding to stop either of them falling through in the night.
My wife talked to the artist’s wife (she was an artist too, as it happens), and at one point the artist’s wife made a joking comment about sending her husband to the dog box if he misbehaved. The dog box was a couch a bit further over on the beams.
Not a spectacular piece of conversation, but I can remember the tone of good humour still, and my mind puzzling over how they coped with being in a ‘bedroom’ that was set over such a precarious ‘floor.’
Of course the dog box that I came across had nothing to do with recalcitrant husbands being sent to one, but was a place for the dog to sleep. These days dogs are likely to get classy treatment: none of your open-mesh wiring nailed to some two-by-fours, and nothing much on the floor except the earth the box is set on. No, these dog boxes are for treating the dog as though she’s some prima donna, or he’s a prize-fighter. They’re lined with a material that will keep the dog warm in the winter and cool in the summer (as duvets are supposed to do for humans but don’t, in my experience). And they’re set about with stainless steel locks and various other contrivances that make the whole thing look like a palace rather than a kennel. So it goes, as Kurt Vonnegut was wont to say.
Posted by Mike Crowl at 10:42 pm