How do you say No?

In years past I used to accompany soloists from the Saints, one of the local brass bands. That came to a sudden end due to economic reasons, I think, and since then I’ve only spasmodically had anything to do with them. However, one of the trombonists is a buddy of mine from church, I see a 'retired' member of the band waiting at the same bus stop most nights, and their principal cornet player, John Lewis, seems to like my accompanying and has asked me to play for him on several occasions, so I’m still in infrequent contact with them.
It's slightly surprising that he still asks me to play, as on one of the more important occasions when I last played for him, I played the introduction with a sharp or flat extra. Not a good start, but we recovered, as old pros do.
John has just rung me tonight, and asked if I’d be interested in playing for him and a few others in the Invercargill Regional Comps, to be held in April. It’s a 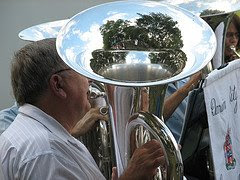 chance to do some playing for something particular, rather than just sitting at home practicing my scales (!), but I’ll also be rehearsing for the play by that time, which means I’ll have a bit on my plate.
I don’t want to join the wine club (sorry, whine club) but I have to think about how much time commitment is involved.
The play isn’t too involved, as far as I’m concerned – and I do need to keep my fingers in motion, so…
So I’m sitting debating whether I should be saying No, or whether I just do what I do in other years and go for it. Hmmm.
Posted by Mike Crowl at 9:36 pm