Getting slowly used to playing the new piano. It's interesting that when I play pieces I've written over the last year, I keep thinking: Hmmm, I probably wouldn't have used that particular chord if I'd written the piece on this piano. There was a certain tone quality to the old one which was quite different to the new one. So, expect any new pieces that get written to have a different feel to them! 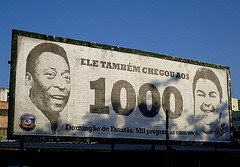 So this is the 1000th post on this blog. Interesting achievement, but in fact as far as blog posts go, I passed that number yonks ago. Just a quick tally of the blog posts on Blogger sites I write for, and have written for, comes up to some 1700. And then there are the two blogs on Orble.com. Can't even tell you how many posts there are on those two, but I've been writing on them both since some time in late 2006. The number would certainly be over the 2000 mark in total. (Must see if there's a way to check this out.)
At a probable average of 400 words per post, that would mean I've written something like 800,000 words over the last few years. Quite a sizeable book!

The photo is by Bruno Farias - not sure what the Spanish means, however! Not even sure if it is Spanish...
Posted by Mike Crowl at 6:14 pm

According to babelfish, the language is Portugese, and roughly translates to "We/It also arrived at 1000". Not sure if that helps any.

Helps plenty - obviously my instincts that it was a suitable picture to use proved right!