Concert tonight, and it's one of those waiting-around days, when you're not really sure what to do with yourself. I've done some practice, though not as much as yesterday, and played through some other music to try and stop myself feeling a bit stale at working on the same pieces over and over. (The thing is, if they're not right now they certainly won't be any better tonight!) But I need to have my fingers up and running when I start, as there won't be any second chances. (Although, at the last concert, one of the singers missed an entry twice, and we finished up doing the first 10 bars or so three times...!)

So:
I've done the Sudoku in the Otago Daily Times, and the easier of the two cryptic crosswords;
we've been to the e-day and taken an older printer there and a couple of cellphones (and met my son, who was volunteering); 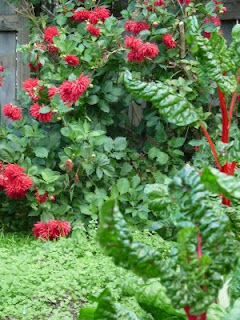 we've done the food shopping for the week, plus getting some items for the supper tonight;
I've planted a bunch of dahlias in the garden by the drive;
I've listened to my daughter bewailing the problems she's had with what was a very expensive digital camera with a great movie function that she can't edit on her laptop. This problem has been going on since she got the camera, and is now exacerbated by the fact that the video section of the camera is virtually full and she can't download the video - even the software's not working properly. At the moment she's managing to get it backed up to my PC, but it's going to take all night by the looks of it...!

I wonder if this is how Mozart, or Beethoven or some other equally esteemed composer spent their Saturday before going off to the Konzerthaus...?


My photo of dahlias in our garden towards the end of summer, along with the red stalks of the silver beet.
Posted by Mike Crowl at 4:23 pm

I enjoyed the start of the piece so much that I just had to repeat it again...and again....and ....one more time! Hey Mike, how did your concert go any way? -Brent

Ah! so that's what happened...good to know! LOL

Concert itself went very well, but attendance was rather lower than last time, which was a bit disappointing. However, the audience enjoyed what we presented, and we had plenty of good feedback.

There'll be a CD out in due course - with Helen singing the song I gave to you when you were down. It'll give you some idea of how it goes.