I was just reading a book called Finding Sanctuary: monastic steps for everyday life, by Abbot Christopher Jamison, when I came across a photograph about halfway through of a handshake. It accompanies the section on Community, and the photograph shows two men shaking hands, though all you can see are their unclothed arms from about the elbows down.

I don't know why this photo struck me as particularly interesting, and I thought I might have a quick look on the Net to see if I could find a copy of it. (I didn't, but you can see something similar here.)

Well, so far I haven't, but to my astonishment, I found hundreds of photos of handshakes on Google images. Each Google image page (on my computer anyway) brings up 18 images. There were 55 pages, making nearly a 1000 images of people shaking hands. Some of them are images connected with the idea of handshakes, but the majority are either of two people shaking hands, or of someone offering to shake their hand. Drawings, photographs, clipart, the lot. 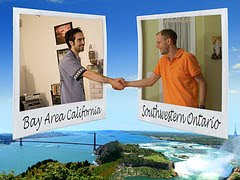 Why is this so extraordinary, you ask, since people shake hands constantly - on an average day in a small country like New Zealand, with some 4.5 million people, there could well be a million handshakes a day.

That in itself is striking. This sign of peace between people goes on minute by minute throughout our nation, and throughout the world - at least in all those places where a handshake is the norm.

The photo on the left is by David Swart, Flickr.com
Posted by Mike Crowl at 2:57 pm