I had no idea what adipex diet pills were, so had to look them up. And I did, and found a 'review' site of them which was sort of positive about them - and sort of not. I think on the basis of this review I wouldn't be trying them, quite apart from the fact that I'm not overweight enough to worry about it.
Which isn't what I set out to write. But my wife went to England (via Auckland and Kuala Lumpur) this morning (no, not all in one morning - come on!) and I'm feeling distinctly unsettled. People go on about 'baching' (as in being a bachelor for a period of time). Can't say it's a state I'm particularly keen to go back to. When you've been married as long as I have (36 years) you're pretty closely tied up with the person you've spent so much time with; at the moment there's a great sense of absence in the house.
And it's been a bit of a week, all up. Some stressful times at work which I won't go into here, but some other stressful things on top of that.
I went to get my driver's licence renewed, for example. You might remember that I had a bit of eyelid surgery about ten days ago. The eyelid's looking good, but the eye itself took a bit of time to recover; in fact I was getting worried that it might have got damaged during the few brief minutes of the op. Don't think it did, but the antibiotic cream I was using for the eyelid certainly blurred things up tremendously, and even when I stopped using it the eye didn't seem to 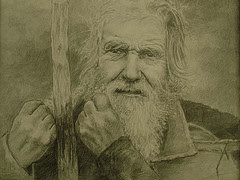 seeing things as clearly as I thought it should. The left eye seems to be doing most of the work, in fact.
To get back to the driver's licence. I went into the AA office here, paid my money, had my photo taken (took them umpteen attempts) and tried to do their eyetest. Crikey, I thought I'd gone blind.
The first lot of letters were an absolute blur, and I only started seeing things more clearly when they upped the size of the letters. And then I was told that there were three columns of letters when my eyes saw only two - and a big black blank where the third column should have been. The girl behind the counter insisted there were three columns; I insisted there were two. Didn't even get as far as checking my peripheral vision.
Felt quite gloomy and began to wonder if my eyesight was going completely. However, a quick trip to the optician's (an old acquaintance outside of his speciality) and it proved that there was nothing more wrong with my eyes than there has been for decades. I've had glasses since I was about nine, as far as I recall.
I could read his charts with ease, and tracked the peripheral light thingee with no problems. Pooh to the AA eye test machine, I say. In fact I later wrote to the AA Head Office, online, and told them that I thought it was a bit of a poor show that they had a machine that doesn't work for most of their customers - it's commonplace for people to wind up either at their doctor's or their optician's surgeries because they're 'failed' the eyesight test at AA, or haven't even bothered to give it a try because they know already how inefficient it is.
No doubt they'll respond by installing up-to-date, brand new, perfectly attuned machines in every one of their offices.
The other 'stress' was that I had to go to Work and Income to apply for my superannuation, which the Government is kindly giving to me after all these years. This shouldn't have been any big deal - people turn 65 every day - but the milestone of it affected me, and I felt quite nervous. And old.
Anyway, thanks to my daughter, who's adept at making sure every i has been dotted and t crossed, the application form was perfect when presented to the woman at W&I (bar one minimal easily-sorted thing) and I had all the right bits of paper to prove who I was, several times over. Notice that my daughter checked all this through before I went. Doesn't that say something about impending age...?

The photo is by Zarko Drincic - he also drew the original picture.
Posted by Mike Crowl at 7:51 pm