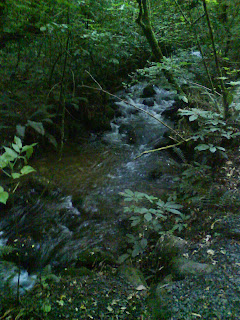 I've lived in Dunedin, New Zealand, for around 55 years of my life. I was in Melbourne for the first three years, moved to Dunedin, stayed here for my childhood and adolescence. Had some very brief stints in Wellington and Auckland while I worked for the NZ Opera Company, moved back to Dunedin, went overseas to the UK for six years, came back with my newly-married wife, lived here totally until 2007 when I spent another five and a half months in the UK, and have been here since.

In all that time I have never once walked up the track through Fraser's Gully - in spite of the fact that I've passed the entrance to it hundreds of times, and have even dropped children off there for football or softball or something in the past.

I said to my wife this afternoon we needed to go for a walk and she was agreeable (she has to keep her reputation up now that she's appeared as the poster girl for Green Prescription in the latest Sport Otago magazine). It was intended as a bit of a fat burner walk, and proved to be that and more.

We wound up walking up Fraser's Gully, right from Kaikorai Valley Rd at the bottom to Dalziel Rd at the top - and then to cap it we walked around down to Taieri Rd, visited my son and his family for a bit and walked back to the car in KV Rd. Quite a bit of a jaunt.

Fraser's Gully turns out to be a delight. I've included a couple of photos here - which I took on the cellphone so the quality may not be high - but I could have photographed a heap more. The track is accompanied by a stream running downhill (naturally) on the left as you climb, and there are small waterfalls and lots of rocks and a 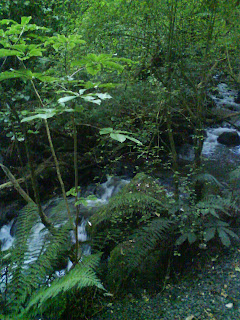 ll the stuff that goes with a normal stream. The track itself is steep in places, although it wasn't as much as I thought it might be - and certainly no worse than climbing Brockville Rd, which runs parallel to it some blocks further south. Fraser's Gully track comes out in Dalziel Rd, which runs along the top of Brockville.

The walk certainly cleared the brains, which had become pretty foggy over the weekend, and helped get our muscles moving. We might not have done it if we'd thought about how far we were going to go, but we did!

On the way back down Taieri Rd we passed the Fernhill Reserve. I haven't been in there since I was a teenager, when Brian Hellyer lived in a house there. He was a doctor who sang in several Dunedin Opera Company productions (and other shows) and I once visited this house which seemed to be hidden away in miles of bush - we went there at night!
Posted by Mike Crowl at 9:10 pm

Thanks for this Mike. A good walk to know about.

Hi, Greg....do you mean to say you didn't know about it either?

Thanks to your blog post, I went to Frasers Gully this morning. I took my wee toddler along for the walk and she loved it. We decided to go as far as the bridge where two streams seem to converge, then we turned back so as to be in time for lunch. As on any walk in Dunedin, we saw many things of great interest. I don't think I have ever been on that track before.

Why it gets missed, I don't know. But thanks.

By the way, I really like your blurb there - "...the world's leading authority on his own opinions..." That's great!

Thanks for your comments. I nearly missed them because for some reason the notifying email went into my sp.am box. Glad that you enjoyed the walk. The climb after that two-stream section is a bit steep but not difficult. You would probably have had to carry your toddler up it!
And you're the first person ever to comment on my blurb. Finally someone's noticed! LOL