Re-viewing A Night at the Opera

While we were wandering around the enormous Costco shop in Nampa, when we were in the States, I picked up a boxed set of Marx Brothers movies for some ridiculous price.   (Also got The King's Speech which was great to see again - marvellous cast, beautifully filmed, and a literate script.)

I've been a fan of the Marx Brothers since I was a kid, but I must admit it's better to watch them with someone else who enjoys them than to watch them on your own.   My just-married son was ideal for this: he'd roar his head off and of course that caused a natural spark of laughter from me, and then we'd set each other off.  (We had this kind of moment while watching the supposed 'out-takes' for Monsters Inc when it first came out at the movies.  Both of us were killing ourselves with laughter.   It happened again with Up, when the little Japanese/American boy squishes along the side of the blimp, making a delightful rubbery noise.)

Anyway, back to the Marx Brothers.  I watched Go West the other day, since it was one I hadn't seen before.  It has its moments, some appalling over-acting, some dreadfully unfunny spots, a fairly incomprehensible plot, and a great climax that's reminiscent of Buster Keaton's movie with a train - The General.  Apparently Keaton had some involvement in this movie too, which might explain the ending.  But there are some brilliant Marxian moments. 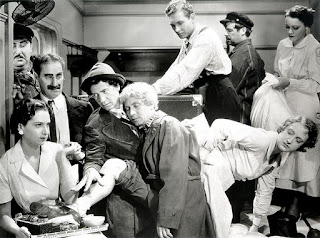 Last night I watched A Night at the Opera, a movie I've seen two or three times before.   The scene with everyone getting squashed into the tiny stateroom remains a classic, and funny to watch on your own, but the tearing up of the contract, bit by bit, seemed sluggish without someone else to laugh along beside you.  Margaret Dumont, who supposedly never actually quite 'got' the Marx Brothers sense of humour, does one of her grande dame parts, and has a noticeable second of forgetting a line in an early scene.   The climax is totally daft, with the brothers causing absolute chaos at the opera, but the scene that struck me most last night was the one onboard the ship when the people from a variety of nations are celebrating on deck, during which Harpo and Chico do their usual musical interludes.

Chico goes first.  He's surrounded by a bunch of kids, and it's hard to believe the scene was ever rehearsed.   Chico, of course, has played this particular kind of piano piece a thousand times, so rehearsal would hardly have been necessary for him.  All the director had to do was put the camera in the right place (and leave it there), get the lighting right, and say Action.   The kids watch Chico playing with amusement at first, then laugh spontaneously, and then with a huge joy.   The joy increases when Harpo takes over - on the piano at this point (when he plays the harp a bit later it's more directed than in this section).  He literally plays with his fists for a few seconds, which has the kids in fits, and then he bangs down the lid on one of his fingers and then on the other.   The kids are besides themselves, particularly when both of his wrists go totally floppy and he has to flick his hands up to get the wrists to straighten again.

Nothing else in the film is quite like this.  There are some moments where you suspect Groucho has thrown in an ad lib because either Chico has just given him a line that wasn't in the script or Harpo has done something totally off the wall, but otherwise the movie is more organised than some of their other films.   And though some of their famous routines work well enough, like the one where they shift beds between two rooms to drive the detective insane, they've obviously been done umpteen times on stage, and have a somewhat overdone air about them.

Still, what a loss it would have been to comedy if the films had never been made, and all people had were memories of a strange group of brothers who made thousands of people laugh.

Even the post put a smile on my face as you recalled scenes familiar to me. Thanks Mike. And if you ever want to get together and have a MB marathon, count me in.

Just watched Day at the Races again for the first time in years. I'll do a post on that soon.