I read kids' books quite often, and by kids' books I don't mean those aimed at any particular age group but ones ranging from delightful full-colour picture books to books that just come in just under the young adults' age range. I've read some YA books too, but usually they're romances or gloomy apocalyptic things, and I'm not so strung out about those.

I had a real go at Diana Wynne Jones' books in 2011, when I read eight of them (they vary in quality but are always imaginative). I read a couple more earlier this year. Her books are in the same kind of fantasy genre as mine, though of course, so far, she's been considerably more successful than me in terms of a wide readership and lots of sales.

However, in the last month I've read a couple of other books I'd like to mention. The first is Speed. Speed is a word with several meanings of course, and Grant uses that ambiguity in her title and in her book. But it's also something of a speed read, because she piles on the angst and the action. I'm not sure if anyone's yet invented an equivalent of the phrase 'page-turner' for e-books, but whatever the correct phrase is, it applies to this book, which I read on my Kindle.

It's probably aimed at young teens: the hero was around 14, if I remember rightly, and proved to be a pretty tough character by the time he'd got himself through dealing with his parents dying and lying policemen and houses burning down. This book is by the Kiwi writer, Dawn Grant (although she writes under D C Grant). It's the first in a series and I wrote a brief review on Goodreads: The book races along at a great pace with the young hero gradually getting himself deeper and deeper into difficulties. Along the way there's a good deal about coping with grief as well as making the right decisions even if they may cost you your life. 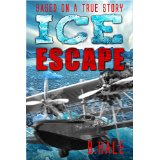 The second book was one I finished today. It starts off a bit more slowly than Speed, is aimed at a slightly younger age range, and is written by someone living here in my home town, someone I haven't met face-to-face but have corresponded on email with. I'd written to her husband on a few occasions - he writes a column in the ODT called WordWays - and it was he who introduced me to his wife and told me about her book.

This author is called Beatrice Hale, and she's written an exciting adventure called Ice Escape. (You can see my review on Goodreads here.)  This book has two young narrators, both boys, and while initially it's a bit of a puzzle as to why the second narrator is there, it soon becomes evident that the two lads' lives will connect.

The story is about a family embarking on a long flight together, on a flying boat. It's set in the 1920s and their adventure is meant to take them around the world. Of course, this being an adventure story things don't quite according to plan. The characters are straightforwardly-drawn, and the adventure itself is exciting enough to make you keep turning pages again. But the interesting thing is that a great deal of information about flying, and living in a perilous situation, and being rescued, and working on a fishing boat is included. There's no sense that it's there just because the writer thinks it's interesting, but because it's integral to the story.

I probably won't write a thriller like Speed or an adventure story like Ice Escape. But each book you read shows you better how to write your own - quite apart from the sheer enjoyment involved in sharing the adventures of fictional characters. As poet Billy Collins writes in One Life to Live:
...this is the only life I have and I never step out of it,
except to follow a character down the alleys of a novel...