Third book in my fantasy series for children 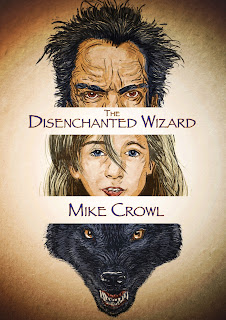 The Disenchanted Wizard - number three in the Grimhilderness series - is now available in ebook format. You can order it from Kindle and a variety of other outlets online: see the list at the end of this post.

The Disenchanted Wizard has had a long, long gestation. Check out innumerable posts on my blog in which I go from joy to despair to frustration to tearing-out-hair, and so on. Some of the delay has been due to other work getting in the way; some of it to procrastination (though not much); some of it to disagreements about the book with my editor-cum-co-writer; some of it has been the fact that large chunks of it have been rewritten. And in some cases rewritten again. As my co-whatever-she-is has said regularly, You can do better.

I won't go again into the considerable changes that have occurred during the course of this book. Suffice to say that only the main characters survived the gruelling process: Della, the 12-year-old at the heart of the story, and her father, Archie; Harold, her younger and sometimes smarter cousin; the curious Mr Crinch - who spent much of the process being an ambivalent character, one we weren't quite sure about: was he was on Della's side or not? You'll have to read the book to find out.

And then there was the wizard himself, originally known only as the Dog (at one time, The Moorish Dog, in fact), but later more often known by his real name, Evan Hoyle. In the very early stages he was Grimhilda's rogue brother. That idea went west. The other character who managed to survive the purges was Xanadu Whitworth, a name that popped into my head before the first draft was written, and which appealed to me so much it stuck. His name sounded so much like that of a footballer's, to me, that that's what he became.*

Anyway, here's the synopsis as it appears online, just to give you an idea of the story:


Della's enthusiasm for soccer, and for the famous player, Xanadu Whitworth, is knocked sideways when her younger cousin, Harold, brings his latest map to show her. The map has strange drawings on it, and within minutes she and her cousin are shocked at what happens with one of them. Worse, when Della's father sees the map, he plainly recognises it from his past, and goes into a panic. Shortly afterwards he rushes out of the house to find someone who can help. But who is this person who can help, and what exactly can they do?


Before the evening is out, Della and Harold˗˗accompanied by the puzzling Mr Crinch˗˗will be thrust not only into a different world, but into a series of terrifying situations. They will have to face the wizard, Evan Hoyle, once known by the nickname, The Dog, and must stop him not only from attacking Xanadu's soccer team, but from taking over the city.

*To see what might have happened to some of the characters who didn't make the cut, check out this the flash fiction story I wrote on the subject, back in 2015. You'll find it on this page: just search by my name, Crowl.