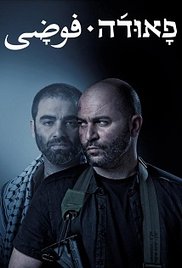 We've been watching a series called Fauda (Chaos) on Netflix over the last week or so. Very intense and often extremely suspenseful.
It concerns the ongoing war between the Israelis and the Palestinians. In this case the focus is mostly on a crack group of soldiers set up to infiltrate the Palestinians and undermine their terrorist attacks. All the soldiers in this group speak Arabic like natives and can pass for Arabs. Their main target is a terrorist who was supposed to be dead - in fact the main character of the series had understood that he'd killed him a couple of years before. But the terrorist is alive and well, and is almost killed (again) early in the piece, only just escaping once again. In the process, however, a wedding is disrupted (the terrorist's younger brother is the groom) by the soldiers (in disguise as the waiters providing the sweetmeats) and tragedy occurs. From then on it's a question of who will win: the soldiers, who want to rid the country of the terrorist, or the terrorist, who is planning a massive attack on the Israelis.
Because the series is made by Israelis, we're rooting for them even though they don't necessarily come across as full of integrity at every point. They're not out for revenge, they just want to keep their country free of a terrorist who they thought they'd already finished off. The Palestinian side is well-presented even though it's hard to empathise fully with them because their cause isn't just revenge, it's outright slaughter. But they come across as human beings, caught up in a seemingly timeless war between two peoples, in which they are basically carrying on a fight that has gone on for centuries in one form or another.
There are a host of characters, several of whom don't survive the crossfires for various reasons. There are some wonderful big set-pieces, and scenes of considerable anguish (from both parties to the war). The Palestinians (many of them played by Israelis - though the terrorist himself is actually a Palestinian actor) tend to present a kind of thinking that is so imbued with hatred that it's hard to empathise fully with them. On the other hand, the behaviour of the Israelis isn't always the best, and there is some laxity in the sexual department between some of the main characters. This didn't seem necessary to the plot, for me, but since a second series is being made, perhaps these elements affect what is yet to come.