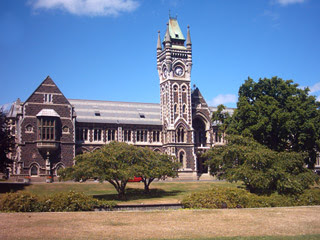 I went to the formal introduction of the Otago University’s three new ‘Fellows’ the other evening after work. It was held in the Hocken Library foyer, and the nibbles were very good.
We were invited because one of the Fellows is an old friend of mine – and my wife works with his wife. The three Fellows are the Burns Fellow, the Mozart Fellow and the Frances Hodgkins Fellow. My friend is the Mozart Fellow, which means he gets a year’s time associated with the University in which he can be relieved of working to deadlines, finding new work, creating music he may not want to create and so forth. He can spend the year thinking about what he’d like to do, compositions that don’t require to be for something.
Anyway, while we were there we met another old acquaintance, also a musician, who, during the course of our conversation mentioned that his twenty-something son sells on Trade Me, full-time, and ‘is rather tight-lipped about how much he makes.’ The indication was that the son was doing very well, selling imported CDs. I’d like to know who he is, so I could check him out, but it’s not easy to find who people are on Trade Me, since we all go under usernames.
I’ve been selling secondhand books on Trade Me for the last five or six months, as I’ve probably mentioned before. I’ve done reasonably well, but would hardly call it making any sort of living. It’s a hobby at this point. To sell on Trade Me you need to focus on some part of the market where you can buy small so you can sell big. Plainly imported CDs are one area, and in the book on successful selling on Trade Me the author talks about a young man who set out to become a millionaire on Trade Me, in spite of lacking any start-up assistance from Work and Income. He sells a lot of hand-held technology and the like. He has become a millionaire, and he basically imports at a fraction of the cost and sells at prices below the usual NZ retail. Obviously, if I was to take up Trade Me as a job, as some people have done, I’d need to get into a market rather more ‘with it’ than secondhand books. Which would mean throwing aside all I know of books, and starting afresh. Guess it’s never too late to learn…but!
Posted by Mike Crowl at 7:43 pm