The HitTails program, while not giving me a large number of results, does throw up some intriguing ‘key words’ that people are supposed to have been looking up. I mentioned ‘portmanteau word’ the other day, but somehow ‘portmanteau boat’ is now a favoured search option. I’ve never heard of a portmanteau boat, and neither has Google – I’m afraid I never bother with any other search engine these days – but it sounds like an interesting concept. What would it be? Something along the lines of a yacht cum sampan?
A portmanteau, as all my readers will know (all five of you), is a large travelling bag of the sort used in 19th century novels. It was large enough to contain compartments, and thus, because it carried a variety of things, the word has come to mean the putting together of disparate objects, or even more particularly, the slotting together of two other words to make a third.
Here’s a definition of its origins from the Online Etymology Dictionary
"Travelling case or bag for clothes and other necessaries," from M.Fr. portemanteau "travelling bag," originally "court official who carried a prince's mantle" (1547), from porte, imperative of porter "to carry" + manteau "cloak." Portmanteau word, a "word blending the sound of two different words," comes from around 1882, and was coined by Lewis Carroll for the sort of words he invented for "Jabberwocky," on notion of "two meanings packed up into one word."
I’m can't quite figure what two words Jabberwocky comes from. Jabber, yes, but Wocky?
Anyway, the other major ‘key word’ was Sanchona. Now to many of you (perhaps four of the five), this is not a word with which you will be familiar. But I know it very well. 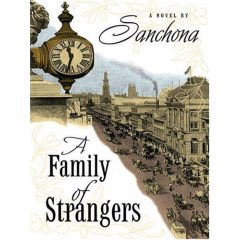 Sanchona is the pseudonym of a friend of mine in Australia who has written a saga on the early days of Australian commercial history. We first ‘met’ when we were both members of an online writing group. I used to read her book chapter by chapter and comment on it. She would invariably reject my comments, but ce la vie! The book that I read hasn’t been published yet, as it was the second part of her series. But her first book is available, and is called A Family of Strangers, and I have a paperback copy. I hope it’s selling well after all the hard work she put into it, chasing agents around the world and revising and revising - and revising!

By the way, having recovered so wonderfully from my bug of Saturday, I got up to go to work this morning. By 7.15 am I was not feeling good again. And in the end I rang work and told them I wouldn't be there. Went back to bed and slept most of the morning, dreaming about finding myself at work in my pyjama trousers, amongst other things. My daughter tells me that the bug, which she has had personal experience of, does this: makes you feel great one day and lousy the next. For up to a week. Great.
Posted by Mike Crowl at 1:51 pm